Having a guy who’s crazy about you is great. But if he’s too clingy, the relationship can quickly become annoying. Being clingy is a sign your boyfriend has entered the neurotic zone. 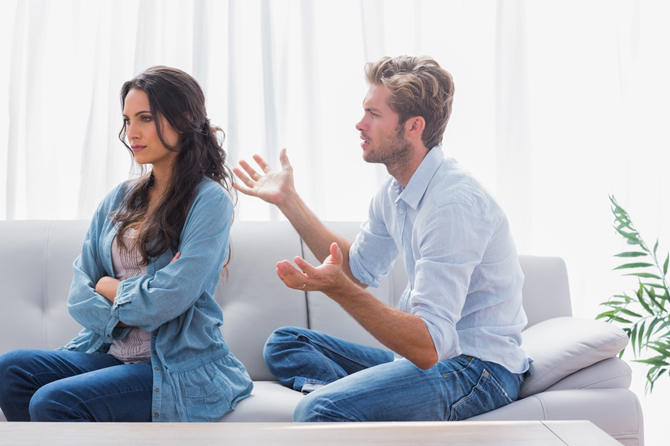 If you think your boyfriend might be clingy, but you aren’t sure, we’ve provided some telltale signs of a clingy boyfriend to look for. Hint: begging to come with you on a girl’s night out is a clue.

If you tell your boyfriend that you’re going out with your friends, a clingy man will probably not take that information in stride. He’ll act pouty and maybe even start a fight with you about it, accusing you of only wanting to meet other men, cheating or questioning why you’d want to spend time away from him.

Clingy boyfriends don’t like you to do anything without them, even when you want to spend time with your family. And when you do make time for him, it’s never enough. Jealousy and clinginess go hand in hand. Read more about jealousy in this post.

This type of behavior is not OK. You should not allow a man to dictate what you do. You have the right to go out sometimes without him.

Not Having His Own Life and Interests

Your clingy man needs his own interests besides being with you 24/7. If he has no other interests, and you somehow manage to do something without him, he’s likely to continually call or text you while you’re away. He might even drive by to make sure you’re where you said you’d be. Clingy boyfriends sometimes just pop in to your place of employment just to say “Hi.” But all this calling, texting and visiting are really just ways for him to check up on you. This behavior is starting to enter the stalking zone.

If he can feel secure in your relationship and develop interests that don’t include you in addition to some shared interests, the relationship will become much healthier. People often believe that they can be happy only when they are with their partner. If your boyfriend feels this way, he needs to realize that you are not and should not be the sole source of his happiness.

Tell your clingy man that you can’t be his everything. You can’t be his only source of companionship. It’s just too overwhelming. Encourage him to pursue something that interests him, or suggest he join a group or a sports team — anything to take some of his focus off you.

He’s Always Asking Whether You Love Him

A clingy boyfriend constantly demands affection from you. He doesn’t let affection come naturally. He might constantly ask whether you love him. This signals that he’s insecure, and it gets old to have to always reassure him.

A guy who constantly asks whether you love him perceives himself as inadequate and probably believes he has no good points. He looks for approval from you so that you’ll convince him he’s worthy.

If he continues this behavior, you’re bound to view him as unattractive. Besides, you might not be in love with him yet. Read more about falling in love here. Clingy men often want to push the relationship into a romantic one too soon.

Hearing you say that you love him gives him the reassurance fix he needs. The problem is that when he asks whether you love him because he’s insecure, no matter what you say, it will never be enough. He needs to first feel secure himself instead of trying to achieve that feeling by you giving it to him.

Calling or Texting You Too Often

You just spoke with your guy on the phone no more than 30 minutes ago and told him you’d see him soon. But, for him, that is 20 minutes too long to go without hearing from you, so now he texts you. His anxiety has been building ever since you two got off the phone rather than giving you space. He demands to know where you are now and what’s taking you so long to get there.

Or, heaven forbid if you don’t answer one of his calls or texts. You’ll then never hear the end of it. It might even lead to a fight. It’s understandable if he is upset if you never answer his calls or respond to his texts, but if you are busy (or driving) and don’t respond right away every time, he needs to respect that without the constant questions, such as “Why didn’t you answer me?” or “Who are you with?”

If some or all those traits sounded like your boyfriend, you can take some steps to stop the behavior, but first understand why he might be so clingy.

If you are secure, you can help your anxious boyfriend become secure as well. But if you’re the avoidant type and handle his clinginess by pushing him away more, you are making his anxiety worse. If you are also the anxious type, you probably like having him need you. Or at least you liked it at first. If your needs have been met, his clinginess can really start to bother you. This is where you need to change your style from anxious to secure to help him be secure with you.

All this clinginess often stems from childhood. If his parents weren’t consistently available for him, he might have developed a need to feel safe and loved. Children who grow up feeling insecure about their parents’ love often see those feelings emerge when they get serious about someone in a relationship. It’s misguided because you are not his mom. In some cases, people need therapy with a trained professional to help them recognize those feelings and learn that future partners are not parents.

A previous girlfriend may made him chase her to the extremes, too. Read more about getting a guy to chase you.

Talk with Him About the Clinginess

The first thing to do when you’re feeling smothered by a clingy man is to talk with him about the problem. Let him know that you love being with him and that he makes you happy, but that his constantly wanting to be with you all the time and not giving you any space is hurting the relationship. Try the speaker-listener technique in this article.

Tell him you feel as if he’s put you on a pedestal. Explain that no relationship can survive that sort of dynamic. Once he believes you are up on that pedestal, you look down on him. That makes him even clingier and worried that he doesn’t measure up.

Paint a scenario for him by switching roles. Ask him how he’d feel if you were tethered to him in the same ways he’s hooked onto you. Let him see that he probably wouldn’t like that amount of clinginess either.

Once you can get him to see that he is clingy and how much you don’t like it, he has taken the first step toward change.

What you don’t want to make him feel during this initial talk is wrong for what he’s been doing. Instead reiterate that you love being with him and then demonstrate what else you’d love, such as that you’d love him to trust you to come over when you say you will without him texting every five minutes. Tell him that you’d love for him to develop and pursue his own interests that have nothing to do with you.

Tell your clingy boyfriend that you want the two of you to succeed in the relationship. Add that if he keeps behaving in clingy ways, such as wanting to spend every minute with you, not having his own interests, or calling or texting too much, you won’t be able to continue the relationship.

Break Up with Him

The great thing about being in a relationship is that you have the control to end it if you like. Speak with your clingy boyfriend about how much the clingy behavior is hurting your relationship. If you’ve done everything you can to reassure him that you want to be with him, just not all the time, and he can’t or won’t change, you can always break up with him. Tips here.

Your clingy boyfriend probably doesn’t like that he acts in a needy way, but he can’t seem to control himself. His clinginess might be from unresolved issues from his childhood. Clinginess is generally a result of someone feeling insecure. No one wants to feel this way, so chances are, your boyfriend doesn’t like being clingy.

Initial infatuation can become annoying, especially if clingy behavior is involved. You don’t necessarily have to break up with a clingy man. You can try the steps to get him to stop being so clingy to see whether they work. If not, your boyfriend might need to seek help on his own to work out his issues; otherwise, he might not be ready to be in a relationship. But if he can get over his insecurity, your relationship has a good chance of succeeding.