For 350 years, humans have relied on some form of condoms to protect against STI transmission and pregnancy. You’re probably familiar with the modern incarnation, which is typically made of latex. While latex condoms are easy to find, up to 6% of the popular is allergic to them. Source. 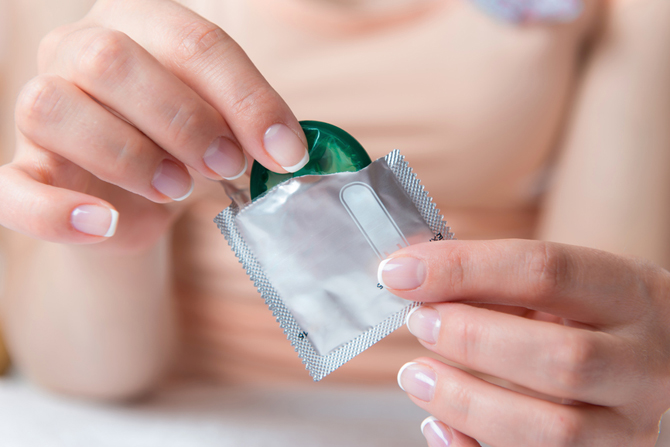 However, condoms are a vital part of sexual health if you don’t use other methods of birth control and protection against STIs, not to mention being readily available and affordable. So before you ditch condoms altogether, we’ve got the 411 on condom allergies.

What Is It About Condoms That Causes An Allergy?

The majority of condoms are made from latex and have been for almost 100 years. Before that, condoms were made from rubber and, historically, condoms were even made from animal intestines! You’re probably familiar with Trojan condoms, the first commercially-available latex condoms.

Latex replaced rubber because latex was thinner while still able to prevent pregnancy and STI transmission — more info on STIs here. It was also easier and safer to produce for manufacturers. However, some people are allergic to latex. Since then, latex has become even thinner, allowing maximum pleasure during your sexual encounters, including oral sex.

Who Is Most Likely to Have a Condom Allergy?

Of course, you’re most likely to experience condom allergies if you’re allergic to latex. If you’d opt for a non-latex glove, then you should pass up condoms made from latex when shopping for your sexual health. WebMD lists a number of of contributing factors when it comes to condom allergies:

Finally, a person with a latex condom allergy is more likely to be allergic to foods that are used in latex production. These include chestnuts, passion fruit, kiwi, bananas and avocados.  You may not have these specific food allergies if you’re allergic to condoms, but you might have a reaction to a latex condom if you do have one or more of those sensitivities.

What if you prefer to use female condoms to keep your sex life safe? According to Planned Parenthood, female condoms are 95% effective when used correctly, and this method of birth control is ideal for people with latex allergies because they’re made of synthetic nitrile. The female condom, which is also known as FC2, uses this material to prevent potential crinkling, which was an issue with the original female condom. However, it’s also a great way to avoid a condom allergy reaction.

Allergic Reactions to Other Materials

If you don’t have a latex allergy but find that using condoms causes any discomfort or irritation. There are several reasons why this occurs.

Fortunately, you can avoid condoms containing spermicide and prelubed condoms if you suspect you’re having a reaction to those chemicals rather than a condom allergy. Stay away from lubricants with special “features.” Choose a hypoallergenic lube separate from condoms. Intimate Organics and Sliquid are two companies that make personal lubes for people who have sensitivities. Make sure you’re using a lube that doesn’t contain oil, which can break down a condom.

If you do suspect a condom allergy because of latex, your doctor can perform a skin or blood test for definitive results.

You might not be positive if you’ve experienced an allergy to condoms if it was a mild allergy. Rash, irritation and an itching sensation are all common with mild reactions, especially to spermicide, according to MDHealth. These symptoms clear up once you stop using the condom or product that is causing the allergy.

For mild reactions like those above, taking a medicine known as antihistamines, such as Benadryl, can relieve symptoms. Your doctor might also prescribe corticosteroids, which are used to treat general allergies in addition to condom allergies, according to WebMD.

Extreme cases of condom allergies can even be fatal. This type of allergy is known as is known as anaphylactic shock and can cause hives, difficulty breathing, vomiting, blood pressure drop, confusion, dizziness, and loss of consciousness. If you experience an extreme reaction to condoms, you should go to the emergency room where they can treat you immediately. Source.

For people with condom allergies, there are alternatives that don’t use latex. The two most condom materials for non-latex condoms are lambskin and polyurethane. Lambskin condoms, also known as natural condoms, have a greater rate of failure to prevent pregnancy — 18% according to the CDC. The CDC also warns against relying solely on lambskin condoms for STI prevention. Source.

Some sources also warn that condoms of this material are more prone to breaking. You’ll find lambskin condoms by companies such as Trojan

Polyurethane condoms are a more recent development than latex condoms, having only been introduced in the 1990s by the parent company of Durex. Many of the common condom manufacturers offer a non-latex option.

A number of smaller condom makers also offer condoms made from polyurethane or polyisoprene. You’ll find condoms in standard and larger sizes, too.

Keeping hypoallergenic condoms on hand isn’t just good for you. You’ll never know if a partner might have an allergy, especially if he’s a one night stand. Tips for that here.

With hypoallergenic condom and lube options, you don’t have to play it risky with your sex life. Of course, you can always choose another form of birth control if you suffer from a condom allergy,