Ladies, there’s something we need to consider. We’ve had the right to vote for nearly 100 years. Women have been in the U.S. Senate since 1922. But when it comes down to equality, how many of us get completely tongue-tied and bashful when it comes to asking a guy out? Guys get just as awkward and nervous as we do, so sometimes when we find a guy worth getting to know, we just need to take the initiative and ask them out instead. But how to ask a guy out? That is the question… 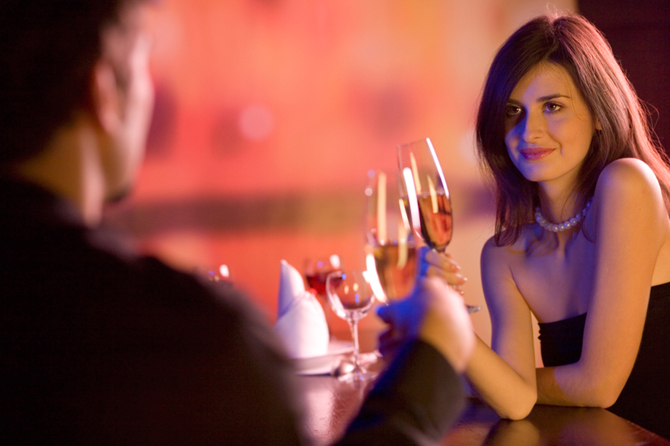 Before you jump right in asking a guy out, start by reading the signs to make sure he’s attracted to you in the first place. You don’t want a “no” answer because there wasn’t anything there to begin with. Check out our guide to signs for sexual attraction.

So how do you gauge his interest? By incorporating the time-honored tradition and ancient art of flirting. Flirting is a great way to measure interest, and it makes both of you feel good without any commitment. It’s a great way to show your interest while making him enjoy your company.

If you start flirting with a guy and he’s just not picking up on the hints or walks away, it’s pretty safe to say that he’s either taken, not interested or completely clueless. Tips for flirting here and more here.

If, on the other hand, he starts flirting back, you can start learning a little more about him and whether he’s truly available or just looking for a good time. Don’t be afraid to touch him or get close to him while you’re flirting, but be aware of any signals he sends that scream, “I’m not comfortable with this!”

The direct route versus subtlety

Once you’ve gotten a few flirting cues from him, it’s time to learn how to ask a guy out. Guys tend to be direct and to the point when they’re asking a girl out, even if they’re nervous. Don’t take a page from their book! Even though guys approach women directly, they have very different expectations of how they expect a woman to act. Asking directly can sometimes come across as masculine or desperate, which may not be the image you want to portray. If that’s the case, you might want to get him to ask you out, instead.

You’re a woman, not a guy, so you’ll want to take a much more subtle approach. Though it can seem a little bit high school, mentioning your interest to mutual friends can help get the word across that you’re interested in asking a guy out. You could even work it into a game of 20 Questions!

On the other hand, if you don’t mind a nontraditional courtship, you could ask him out directly – just don’t expect to be wooed or courted extensively. Though relationships started this way tend to work out quite well, with a great deal of honesty and respect, asking a guy out this way can turn off a guy who has a particular view of how dating should be handled.

When it all comes down to it, it’s much better to ask outright and get a negative response than it is to wonder “What if?” for the rest of your life. Even though it can be completely nerve wracking when you’re trying to figure out how to ask a guy out, knowing how it turns out is much better than wondering what might have been because you weren’t brave enough in asking him out. After all, the worst he can say is no.

If you’re still worried about it and need a low-pressure way to ask him out, there are a few options you have available.

You should be aware that this may inadvertently put you into the “friend” zone instead of the “date” zone, so make sure you clear that up – you don’t want to tell a friend you’re dating him if he thinks you’re just best buds hanging out together. If you’re really shy, you could ask him in a note, email or over the phone, but keep in mind that he’s not going to be able to read your tone or body language if you ask him that way.

How, where and when

Now let’s take a minute to figure out the best plan, approach and scenario to consider when you’re asking that special guy out directly. Have something in mind before you ask him. If he says “Yes”, you want to be able to make a suggestion. Think about what he particularly likes or take advantage of something going on in your community like a dance or concert.

The traditional date works well too, with dinner and a movie, or work in some cultural ideas he might be interested in, such as an art show, play, museum or big event. We’ve got plenty of other unique date ideas here.

Wait until you get a chance to ask him in a casual, laid-back setting – if you ask him when he’s working or in a class, you may have problems with getting his full attention as well as drawing the wrath of the teacher or boss. If you usually see him in classes or at work, try to catch him on the way to or from lunch or while on break, but don’t follow him around like a lost puppy – stalking is just as creepy for the guys as it is for us ladies.

Don’t try to ask him in front of a bunch of friends, because he may not answer honestly depending on peer pressure, and he may end up getting picked on if his friends don’t find you to their liking. Instead, if you can’t get a moment alone, ask if you can talk to him for a minute and walk a few paces away from the group you’re hanging out with.

Now that you’ve got his attention, do it the right way. Be confident – confidence is a very sexy look inside the bedroom and out! If you’re not that confident, fake it as best you can- spend a little extra time that day to look fabulous, whether it’s doing a little more with your hair, makeup and clothing or just a little more positive self-talk. More tips for confidence.

Use good body language – don’t slouch or talk with your hands too much, and be sure to maintain eye contact, unless you’re amazing at doing some serious flirting with your eyelashes. When you get a chance to talk to him privately, speak slowly and clearly enough to be understood. You don’t want to repeat yourself when it’s hard to ask him in the first place!

If you’ve read the signs right, the chance your guy will say “No” are pretty slim, but on the off chance that he does say “No”, you’ll want to be prepared. Don’t paint yourself a rosy picture of your future together before you’ve even found out if he’s interested. Make sure you have a graceful exit strategy if he does say “No”, whether it’s a class you need to get to, a friend you’re meeting up with or some other reason to get out of an awkward situation.

If you’re talking to him and the vibe just isn’t there, plan a different question to ask instead of asking him out, like what he thinks of another person or advice on something he’s knowledgeable about. Guys love the last one, as they tend to be the “fixers” in a relationship, and could warm things up down the road if he’s not ready right now.

Even though asking a guy out can be a nerve-wracking experience, it can be totally worth it if you get up the courage. If you asked him directly and things work out, you’ll have a great relationship on a more equal footing with each other. If you worked to get him to ask you out, you’ll enjoy a more traditional relationship which has its own benefits Either way, here’s hoping you have a fabulous time with your new guy.

Light Bondage: Powerplay & Enhancing Your Sex Life
What Is An Orgasm? The Mystery Has Been Solved