As modern women, texting a guy shouldn’t be that big a deal, right? But when you want to know how to text a guy, it can seem like there’s a whole new set of rules to figure out, especially at the beginning of a relationship. Texting can often make or break your relationship, but what are the rules? How often should you be texting a guy? Should you get serious or play dirty? How often should you start a text conversation? 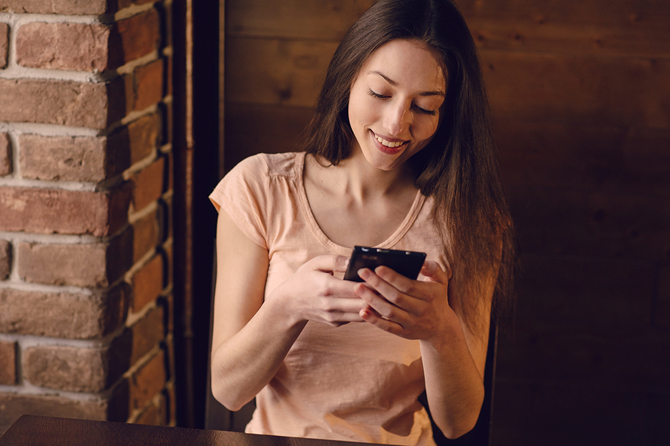 In this article, we’ll discuss the ins and outs of how to text a guy without coming across the wrong way.

16 Rules for How to Text a Guy

When you’re first texting a guy, text him as much as he is texting you or even slightly less. This helps keep you from looking overeager for his attention. It also makes you seem a little more unattainable, so if he’s interested, he’ll try harder to reach you. Slow down and don’t send so many texts that almost every notification he gets is from you. Make him miss you using this and other tips from this guide.

2. Keep It Light and Fun

You’re not looking for a proposal or to move in together at this point in the relationship, so just keep it light. Texting a guy is about having fun and not having a deep, serious conversation – save that for when you get together with him in person and are really trying to get to know one another better. Even a brief, “I was thinking about you earlier,” note can brighten his day without hitting it too hard.

3. Flirt with Him Through Your Texts

This fits in with keeping it light and fun, because you want him to know you’re interested without being overbearing or too serious. Remember that he can’t read your tone the way he could hear it if you were talking in person, so make sure you’re coming across clearly and that he’s not misunderstanding what you’re saying. If the conversation is that serious, wait to have it in person.

Check out these tips, some texting games and these flirty text ideas to get the ball rolling.

4. You Don’t Need to Get Dirty with Your Texts

For that matter, you’ll get further by flirting and keeping it light than by getting too dirty too soon and making him think that that’s all you’re interested in. If you’ve been together a while (in other words, you’ve had sex with him) or he knows your sense of humor, go for it, just keep private things private. If you break up, you don’t want that naughty picture showing up on Facebook for a future employer to see – embarrassing!

Of course, there are some times when you’ll want to send sexy texts, and this post will help you out with that. If you really want to get dirty, this guide has you covered!

When it’s your first time texting a guy, it can be really hard to figure out what to say when you’re starting the conversation. Though it does get much easier with time, here are some basic breaking-the-ice conversation starters: mention that you’ve got two tickets to a movie/concert/event (keep in mind, you have to handle this carefully to prevent being friend-zoned); ask about his new job/car/shirt; congratulate him when “his team” wins a big game; see if he’s still interested in going to that art show this weekend and if he’d like some company and similar topics.

Getting a lot of one or two word responses? Don’t take it to mean that the guy you’re texting doesn’t want to get to know you. A lot of guys get nervous and even get tongue-tied when texting! If you want to draw him out, mention that you’re a little nervous because texting a guy isn’t something you do very often. By showing him that you’re willing to reveal a little more about yourself to him, he gets the chance to respond and open up to you a little more in turn.

In other words, don’t only ask questions, give him some of your thoughts on the matter as well. While it’s fun to flirt, don’t answer questions with questions all the time – it makes you seem unsure of yourself and can annoy the guy because he thinks you’re being coy instead of letting him get to know you better.

8. Let Him Initiate the Conversation at Least Half of the Time

This falls in with being a little difficult to approach. By giving him the chance to start the conversation, he can show his interest instead of you doing all the work to start or maintain the relationship. At the same time, don’t make it a hard and fast rule that you can only text him after he’s initiated the last conversation – just keep it in mind generally.

9. Don’t Respond to Every Text Immediately, Especially If You’re Busy

You don’t want to give him the impression that you’re waiting anxiously for his texts. Wait a few minutes to respond, or even an hour or two if things are really busy or you’re at work and texting is frowned upon. This is part of the foundation of playing hard to get. More here.

If the text does need an immediate response, such as his house is on fire and he’s not sure what to do, obviously you should respond as quickly as possible. On the other hand, if he can’t figure out to get out of a burning building and call 911, do you really want to be dating him?

10. Don’t Bombard Him with Texts

Texting a guy too often can come across as creepy, just like it does when a guy texts you too often. Give him a chance to respond instead of sending text after text after text. If he’s not responding, try asking a question, like if he wants to get together sometime or what he thinks of last night’s game. If he doesn’t respond then, he’s ignoring you.

It can be extremely frustrating if the object of your affection never texts you first. If things are otherwise okay, that’s fine! Guys don’t always pick up on social cues as quickly as women do. If you want him to text you first more often, just mention that it really brightens your day when you hear from him. Guys like it when they get texts from their girlfriends, so they’ll reciprocate if they know it means something to you.

12. Back Off The Emoticons

A smiley face is cute when you’ve made a joke. A string of 83 of them, not so much. You’re having a conversation, not art class, so try to stick to the topic at hand instead of going overboard with the cute stuff. Another area that can be annoying is if your text has more shortcuts and abbreviations than actual words. You’re an adult, text like one.

If you’re asking him out on a date, make sure you give him enough notice or a few different options for days and times. By giving him at least three days to plan, he has the opportunity to come up with something to make the evening special and look his best without having to rush. Giving a few different time and day options help accommodate his schedule, which shows that you’re flexible to help meet his needs while your relationship is getting off the ground.

K.I.S.S. stands for Keep it Simple, Sweetie (that’s the polite version). Don’t go into every last detail of your day or keep the conversation going on forever. He doesn’t need to hear about every detail of your cat’s vet visit or a complete rehash of the argument you had with your best friend. Leaving the details wanting also gives him a way to break the ice if you two get together in person later on – he can ask how the vet visit went or why you’re not on speaking terms with your BFF at the moment.

Try to end text conversations with him before he does. This is another technique to make you seem more unattainable and make him want you more. Don’t be rude, just mention that you need to get back to work, have to go somewhere or similar reasoning. This is a great way to keep him coming back for more, because he wants to continue the conversation. Even better, it’s a great opening to ask if he wants to get together later for coffee or dinner to continue the conversation, getting you to the face-time part of the relationship.

Don’t plan on texting being the do-all and end-all of your relationship. Your goal isn’t to keep texting for the rest of time, it’s to get together in person. When the opportunity presents itself, make sure you steer the conversation in that direction. A great way to do this is mention that you’re kind of busy right now or that it’s hard to text so much of what you want to talk about, but that you would love to talk it over in person. Sometimes a phone call is good, too.

Texting a guy can seem like a really nerve-wracking experience, but by following these rules, you’ll find that it gets easier as you become more experienced. Now that you know how to text a guy, why not give it a shot? At worst, you’ll know what it’s like, whether it’s going to work and gain some experience for the next time you try it. At best, you’ll be able to get a good relationship going that could take you anywhere and lead to unimaginable happiness. Take a chance and see what happens!

20 Famous Love Quotes to Inspire You
Is There Any Truth to “If You Love Someone Let Them Go”?