Even though he says he loves the bachelor lifestyle, he might be hinting about his intentions to put a ring on it without even knowing it. Some hints might be more subtle than others, but they all add up to a clear picture of his investment in the relationship. If you want to get to the bottom of his feelings without having to come right out and ask, look out for these 10 signs he wants to marry you. 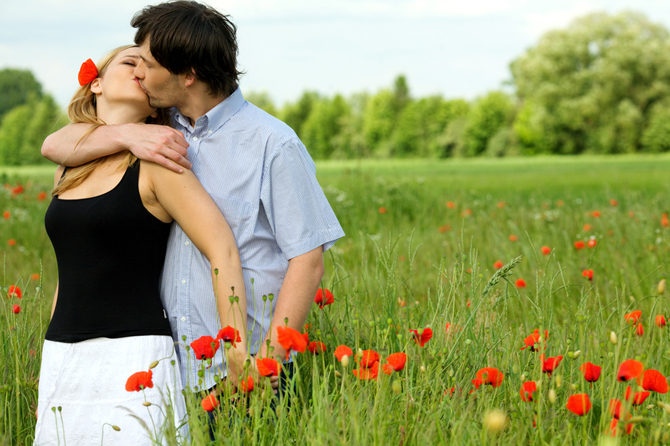 Every woman knows that men throw around a lot of superlatives as “pick up lines” even if they don’t really mean them. I’m sure we’ve all heard from the guy at the bar that we are “the prettiest girl” he’s ever seen. To be fair, most of us women our guilty of a few exaggerations too—”It’s the biggest I’ve ever seen!” But if he’s still praising your superiority after you’re in a committed relationship, the chances are that he means it—and that means something.

You might start thinking about marriage, too, if he’s “the one.”

2. He’s introduced you to his family and/or friends

Getting married would literally make you a part of his family, so if he’s already taken you home to mom that’s definitely a sign that he’s serious. But more importantly, you’ll want to consider the kind of relationship you have with his family. Do they like you? Do they ask about you often? Does he brag about you when you’re not around? Have they ever brought up the subject of marriage with him?

Pay attention to the kind of culture and values his family and friends have. How long have his parents been married? Are any of his siblings married? Are his friends married? What are his and his family’s religious views on marriage? This should give you some idea of what he’s thinking in terms of his relationship to you.

For some people, friends are their family, and you may already know his friends if you met in any of these great places to meet guys.

Dr. Paul Dobrandsky, director at Womens Happiness, says that one of the surefire signs a man wants to marry you is when he refers to you as a member of his “team” in the workplace. If he confides in you about his work problems and celebrates his successes with you, this means that he both values your opinion and your influence in his life.

This is crucial because it allows you to be a part of a major portion of his life. If a guy automatically assumes you won’t understand, or refuses to talk about his experiences at work, this can create a major barrier in your relationship going forward. Check out our relationship advice to make it work.

4. He jokes about marriage with you

You know the saying “there’s truth in jest”? Well it most definitely applies in this situation. If he makes any lighthearted jokes about the two of you getting married, having children, growing old together, etc., he’s probably just fishing for your reaction to the idea.

On the other hand, he shouldn’t strictly joke about the idea of marriage, since this might be a sign of immaturity or just plain resistance to think seriously about it. His joking should never cross the line of being offensive, and should also not be too continuous, since this could be a sign that he will never be ready to commit.

5. He wants to move in together

Recent data from the Centers for Disease Control (CDC) shows that nearly half of American women between the ages of 15 and 44 have lived with a partner before marriage. Cohabitation has become increasingly popular in the last 50 years, with Census data reporting a 900 percent increase.

But since cohabitation is much more common, is it really still a good indicator of your partner’s commitment? Yes and no. A 2011 Pew Research study found that nearly two-thirds of Americans who had ever lived with a partner before marriage considered it a stepping stone to marriage. As expected, two-thirds of couples married in 2012 shared a living space for over two years before they tied the knot.

More good news: recent studies contest the popular rumor that living together leads to divorce, with experts arguing that the ages of the couple cohabitating is a more influential factor on future marital success.

6. He talks about the future with you

Whether it’s about his future job prospects or saving up for a European vacation, including you in his future plans is a big sign that he’s committed. This is true even if he’s only speaking hypothetically. For example, he might ask you if you could ever see yourself living in New York City, or if you prefer living some place up north or south.

He might speak more generally about the kind of things you want out of life also—like whether you prefer a low-stress job with less money or a high-stress job with more money. Even feeling out the compatibility of your lifestyles and lifestyle goals is a good sign that he’s thinking about a future with you.

It’s completely natural if you’re not ready, however, and you should check whether you’re ready or just moving from relationship to relationship. More on that here.

Women aren’t the only ones who have a ticking biological clock. Doctor Harry Fisch, professor of urology and reproductive medicine at New York Presbyterian/Weill Cornell Medical Center, claims that men aged 35 or older have half the chance of fathering a child within a year, compared to someone younger than 30. In other words, he’s thinking about children a lot earlier than you think, and that might be reflected in his relationship with you.

For example, he may be more optimistic in the face of a pregnancy scare, or he may start to get more involved in the lives of his nieces and nephews. Maybe he’s even mentioned some boys or girls names he likes. Or he might talk about what your future child together would look like.

Body language expert Janine Driver claims in her book that your guy might be sending you physical clues of his interest in marriage. These can include behaviors like massaging your neck while you’re working, or come up from behind and wrap his arms around you while you’re cooking. This shows that he’s excited at the prospect of making your his wife, and it gives your relationship that fresh, can’t-get-enough-of-each-other feeling you had when you first started dating.

If he seems extra giddy or adventurous, he might be thinking about how and when he’s going to propose. You can help by setting a romantic scene.

9. He likes staying in with you

It’s important that you both have your own lives and social groups, but he should also be interested in just hanging out at home with you instead of going out partying. Staying in more often is also a good sign that he’s growing out of the party lifestyle and is ready to settle down. More importantly, it shows that he enjoys your company and can have fun with you even if you’re just staying in and  doing the same old thing.

However, this doesn’t mean that you shouldn’t still spend time dressing up and going out together, since this is important to keep the passion in your relationship alive. Just as long as this isn’t the only way the two of you can have fun together.

At the end of the day, marriage is just a formality. That’s not to say it doesn’t mean something, but it doesn’t cause the dramatic change in your relationship that many people imagine—after the honeymoon phase, at least. If he already treats you like his wife—confiding in you first about big decisions, supporting you, constantly expressing his love and commitment to you—he’s definitely ready to make it official. To jump start the proposal, you can also start acting like his wife even before he gets down on one knee.

Some of these signs go hand-in-hand, while others might be isolated occurrences that aren’t clearly indicative in themselves. Ideally, you should be able to check off at least three signs to support your suspicion that he’s thinking about marriage. However, it’s important to remember that marriage shouldn’t necessarily be your ultimate goal. Research shows that more and more couples are defying traditional rules, with more than half of first babies born to unwed mothers. The trend is equally prevalent among celebrities as well.

Sometimes tying the knot can turn to a miserable relationship, so the more items from this list that apply to you, the better!

With high divorce rates and hard financial times, it’s perhaps understandable that some couples choose to forgo marriage all together. But this dissonance in public views on marriage is why you should communicate with your partner about your desires and expectations on the matter, even if you haven’t begun seeing signs yet. Just make sure you’re not creating too much pressure, which is a major turn off.

Should You Call Him: 5 Vital Steps Before You Do Anything
How To Play Hard To Get: 8 Ways To Win Him Over