Since 1970, the Title X National Family Planning Program has been the only federal program solely dedicated to family planning and related health care. Services include contraceptive supplies and birth control information, as well as cervical and breast cancer screenings, sexually transmitted disease and HIV testing and education, and pregnancy diagnosis and counseling services.

The majority of the funding for family planning clinics, such as Planned Parenthood, comes from government reimbursements and grants, including Medicaid reimbursement and Title X funding.

Then, in fiscal year 2011, Congress voted to decrease Title X funding by over 18 million dollars. In 2018, federal Title X funds distributed throughout the country are $31 million lower than they were at their peak in 2010. 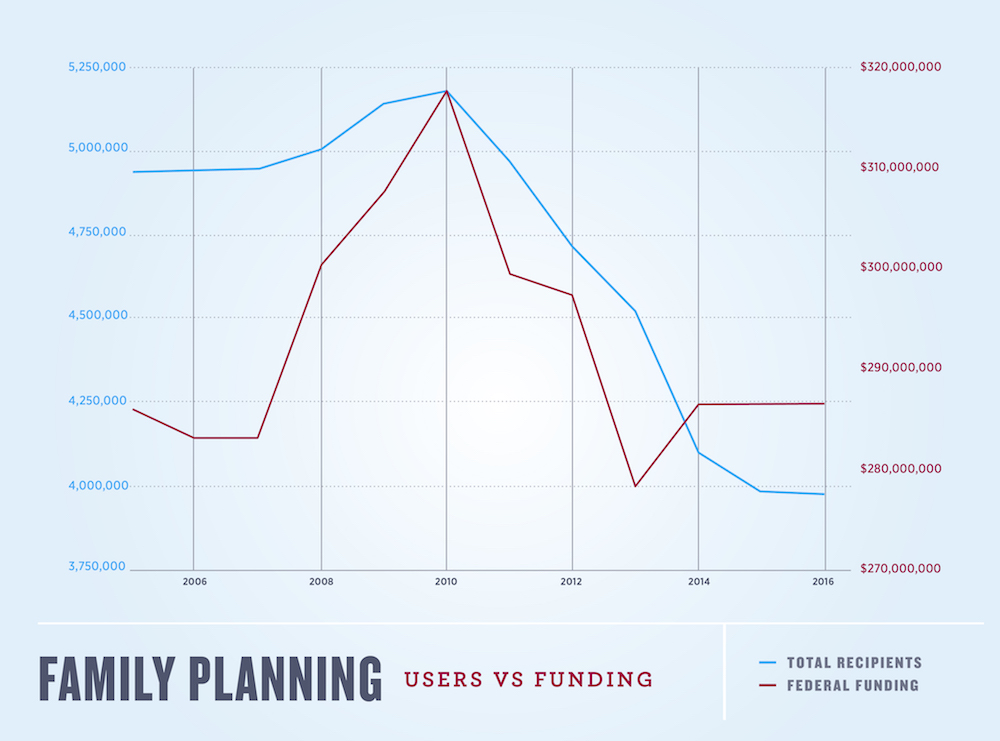 Over the same time period, hundreds of clinics have closed throughout the country. The ones that remain serve 1.2 million fewer people than they did before the cuts. In total, Title X funding reached 23% fewer total users nationwide in 2016 compared to 2010.

Meanwhile, studies have shown that the number of women who are in need of publicly-funded contraceptive services has been growing since 2010. 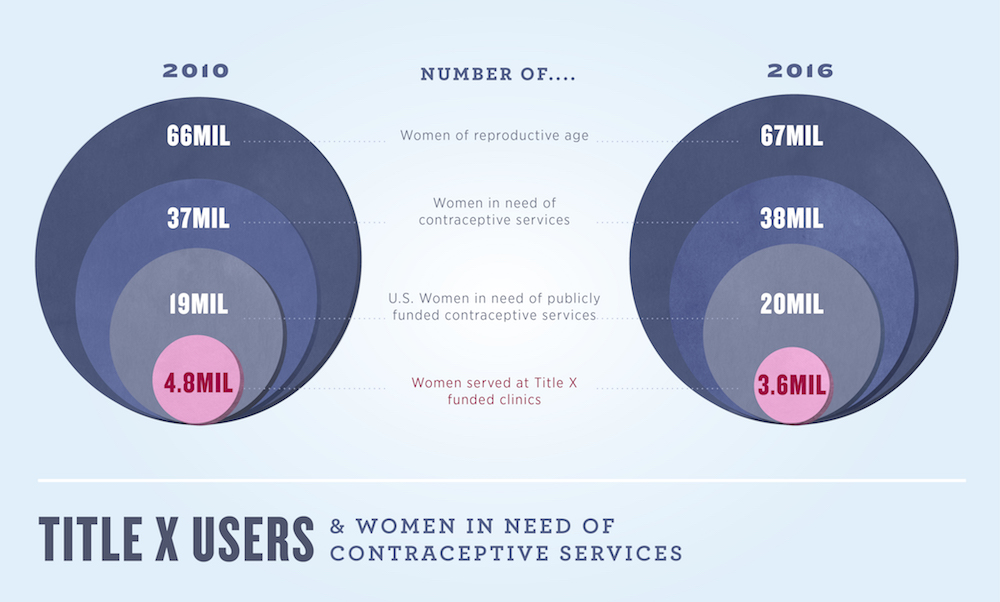 In aggregate, this means that the percentage of women in need of publicly-funded contraceptive services who received those services has fallen in the last half decade.

In 2010, approximately 25% of the 19 million women in need of these services received them at clinics funded by Title X. But in 2016, that figure had fallen to below 20% due to both fewer Title X users being served and an increase in need for services.

Certain States Have Been Impacted More than Others

While the national trend has shown a swift decline in total number of Title X family planning service users, the state-by-state trends are more varied. Some states like Nebraska have seen the number of users remain relatively steady or increase slightly. But other states have seen a dramatic decline in total users. 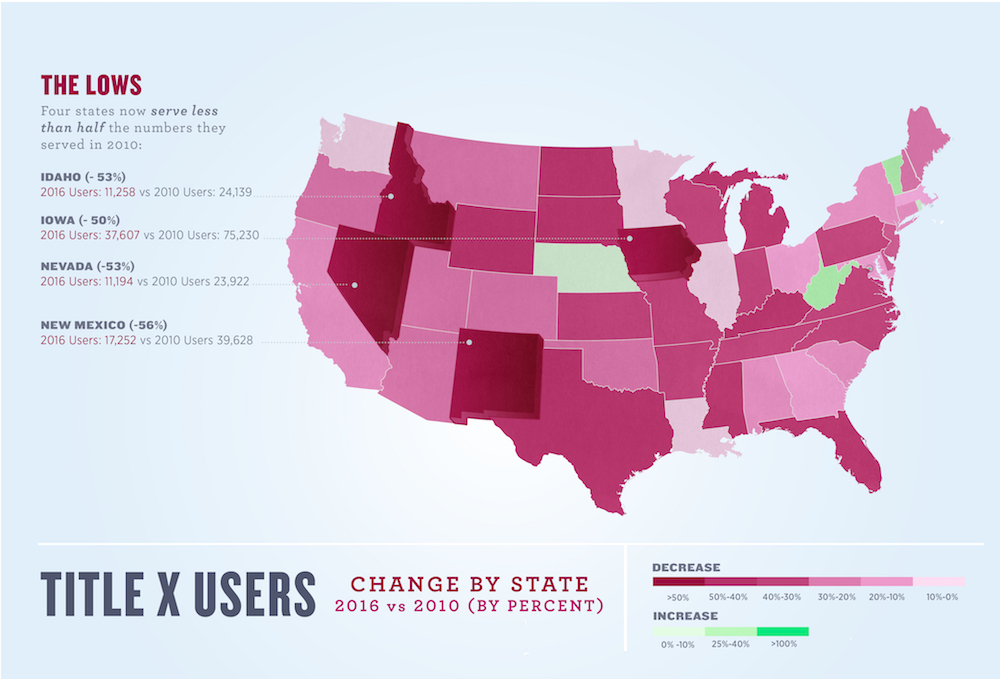 Four states now serve less than half the numbers they served in 2010, as illustrated by the above graphic. 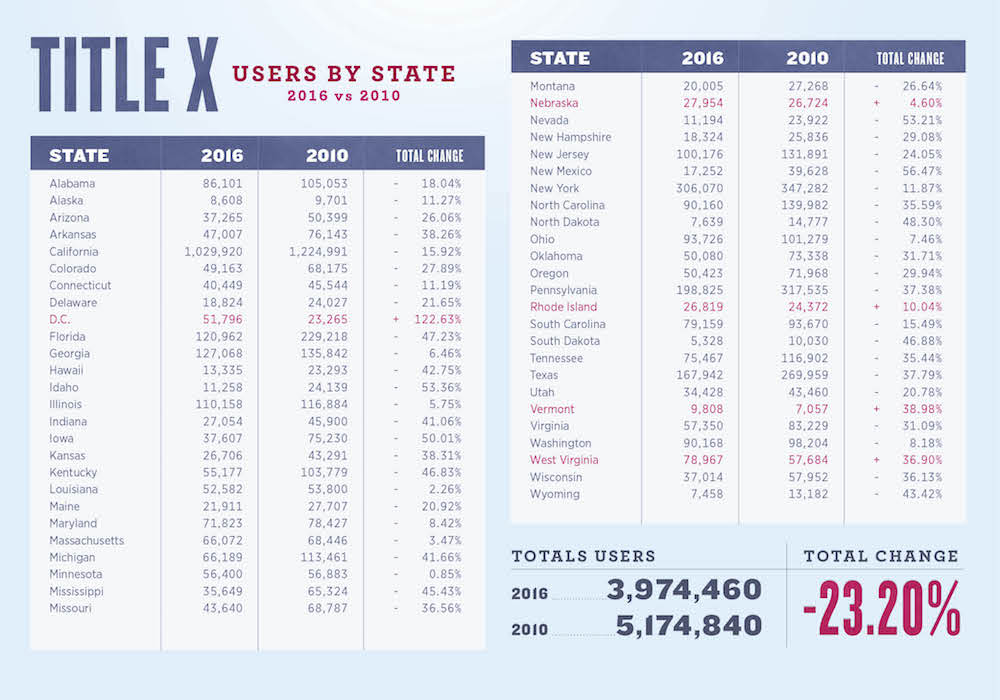 Family Planning Services Are Impacted by Many Factors

Besides, Title X funding, there are many additional factors that impact the need and availability of public family planning services, such as contraceptives and women’s wellness checks, such as state health care laws and other funding, such as private grants.

As a result, eighty-two clinics closed, a third of which were Planned Parenthood locations. “Of the close to 218,000 women receiving care through this funding, 40% obtained services from Planned Parenthood and other specialized family planning agencies,” according to the Texas Policy Evaluation Project.

Since 2011, many of the women who continue to receive services at the remaining clinics have paid higher fixed (versus sliding) fees and have reduced access to the most effective forms of birth control, such as IUDs and implants.

Also since 2011, the numbers and rate of pregnancy-related deaths in Texas has almost doubled.

Since 2011, the House has voted to completely defund the Title X program six times, an attempt that is always struck down in the Senate.

According to Planned Parenthood, the organization is responsible for serving the needs of over 40% of all patients across the country who rely on Title X services despite only making up 13% of the clinics funded by those same grants.

Ten states have attempted to individually defund Planned Parenthood clinics by refusing to reimburse them for Medicaid payments. President Obama sent each state a letter warning officials that this action was against federal law. State courts consistently ruled against the restriction of Medicaid reimbursements.

The states’ other tactic was an attempt to to block the clinics from receiving Title X funding. Again, under the Obama administration, the U.S. Department of Health and Human Services (HHS) issued a rule ensuring that Title X recipients cannot be be blocked from receiving funding for providing abortion services. This rule protects the funding of Planned Parenthood clinics, among many others.

Figging 101: From Ancient Punishment to Modern Pleasure
How To Give A Super-Relaxing, Sensual Massage + Video Demonstrations