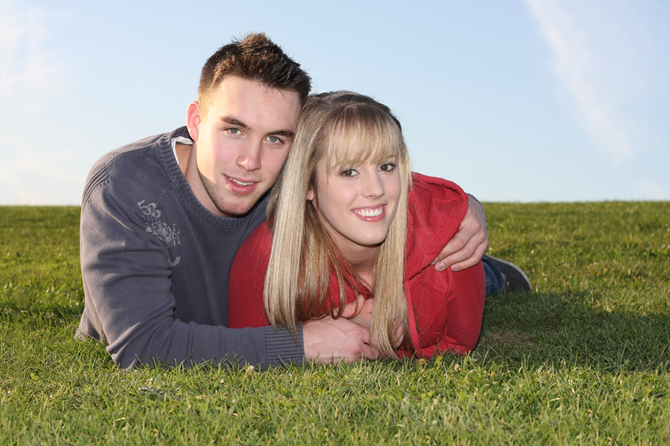 High school romances usually occur with like-minded people: dorks hook up with nerds, jocks like cheerleaders, and band and drama members tend to stick together as well. But when you get married, other concerns become more important, such as whether you want to be parents, how you handle finances and where you want to live. If your ideals don’t align, divorce or cheating might be in the cards. Read more about that in this post.

But many people just settle and stay with their high school sweetheart because it’s safe and secure. And many people are too scared to leave. People worry that they’ll never find someone else who cares about them the same way. Basing your relationship on fear is not ideal.

It’s usually a good idea to have some different types of relationships before you settle down to marry. That way, you’ll find out who you are as a person and will have a better idea of the type of person you want to end up with.

Women are undeniably attracted to bad boys and don’t care whether they’re the right match or whether they’ll stick around for the long run.

Bad boys are simply irresistible – and so are bad girls! They ooze testosterone. They’re confident, good looking and are usually strong, silent types. Bad boys know how to look at you with their sexy eyes … that look that tells you they know just what they’re going to do with you … that look that makes you melt. They certainly know all the tricks in the bedroom!

Bad boys offer a primal appeal for women. Face it: you aren’t thinking about whether that bad boy makes good boyfriend or husband material (he won’t). But that doesn’t stop you from wanting one … at least temporarily.

Bad boys might not stick around to help you raise a family, but they know how to get your attention and how to turn you on. There’s nothing wrong with pursuing a relationship with a bad boy. Just don’t fool yourself into thinking you’ll be the one who’ll change him and get him to settle down. That might happen, but it’s rare and usually happens as a coincidence — you started dating him at the same time he was ready to settle down. Have fun with the bad boy, but try not to get too serious about him.

3. The Guy You’re Going to Work On: The Project

Raise your hand if you’ve ever been in this scenario or know someone who has: You meet a guy and start dating him. You have great chemistry together, but there are certain things you don’t like about him. You see these flaws plain as day — he wasn’t hiding anything from you. But you don’t care about any of them because you figure you can get him to change.

It doesn’t matter that he’s not motivated to get a job, to stop flirting with other women, to never want children, to stop robbing banks or whatever — you just know you can change him. He does those things or feels that way, you rationalize, because he hasn’t wanted to change for anyone before. But he will for you. Plus, you love a good challenge.

That thinking is misguided and delusional. All you’ll get from this type of relationship is tired and frustrated. You can’t change him. The only person you can change is yourself.

It’s not your job to heal or fix anyone, and that just leads to a variety of types of relationship troubles. It’s better to find someone who shares your values.

You’ve met the guy your mother and father have always dreamed about and maybe in one of the ways that should be successful. More on that here. He’s successful, kind, smart, polite, witty, and he loves you. Ah. The stuff of dreams, really. Only the problem is that they’re not your dreams.

Even though this seemingly perfect guy has all the right credentials to make you a happy Mrs. for life, you just aren’t attracted to him. What gives?

You might try to think your way into liking this guy. You tell yourself you’d be crazy to let him slip away, and you sort of will yourself to be turned on by him or convince yourself you feel the signs of being in love. But the next time you see him, still nothing. Can this sort of relationship work? Can you become attracted to him as time goes on?

In life, anything is possible. But becoming physically attracted to someone that you initially scored zero in the hots department for is highly unlikely. If you marry someone who’s perfect on paper but that you feel no attraction toward, your marriage will probably be one of comfort and security, and even one that is intellectually stimulating, but the relationship will be lacking in the sex department.

When you enter a marriage with everything but physical attraction, the marriage will have a difficult time surviving. Eventually, you’ll want someone who turns you on, and you’ll feel guilty that you couldn’t make it work with such a perfect guy. And that isn’t fair to either of you.

5. The Guy Who’s Hot But Nothing Else

Many relationships start because of physical attraction. The problem begins when you want more than just a booty call relationship, but he doesn’t. You can’t make a guy want to marry you or become exclusive to you if he isn’t feeling it. Here are some ways to tell that this relationship is about only the sex:

If you’re in such a relationship, understand what it is. If you only want sex, too, that’s fine and you can check out this post about NSA sex. But once the relationship has been defined as a sex-only type of relationship, it’s usually never going to be anything more than that. If you want a guy who is interested in you, it’s better to find someone else than to waste your time with this guy.

When you’re ready to settle down with Mr. Right, do you wonder how you’d know who that would be? The answer is to ask the right questions. And do so before you’ve already fallen for the guy. Early in the relationship, you can screen guys to determine whether they might fit the bill. You can do this both by asking questions and by observing behavior.

Note how this guy acts when he doesn’t get what he wants. You want someone who takes things in stride and talks things through versus someone who becomes angry easily. Notice if he always needs to be right, or if he’s willing to discuss matters and listen to your side, too.

Trust is a big issue in a potential husband. Look for signs that indicate whether he’s trustworthy or not. Does he call you when he says he will? Or does he not and brush it off as no big deal? Does he honor his dates he makes with you? Or does he often cancel at the last minute. You want your potential husband to do what he says he’ll do and honor his commitments. Talk about your values and what you want from life. See whether he wants the same things you do.

There are deal breakers to look out for, too. This list offers more reasons to break u. If he’s abusive, addicted to a substance or has affairs, he’s not good marriage material. There are other questions to ask before you take the leap.

How to Deal with a Clingy Boyfriend
Do Guys Like Shy Girls? 5 Reasons the Answer is “Yes!”