Many guys learn how to be romantic from their girls, meaning it may be up to you to show him what romance is all about. 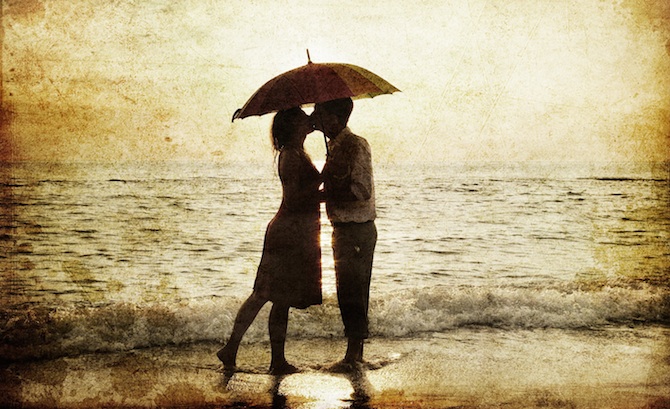 Being romantic with your man can not only make your relationship stronger, it can also help him to fall deeper in love with you. While romance all the time can get boring and actually push your guy away, a little extra something here and there can keep his thoughts on you and draw you both closer to each other.

Thankfully you don’t have to spend a ton of money to be romantic — in fact, these 10 tips on how to be romantic cost very little but can have a big impact!

There’s truth to the saying “the way to a man’s heart is through his stomach.” Bachelors are notorious for not cooking for themselves frequently, and often subsist on a diet of fast food and appetizers at the bar. A great way to show him your romantic side is to cook his favorite meal for him. You can ask him what foods he likes best, or simply surprise him with a delicious home cooked meal that you can both enjoy together.

Note: If haven’t met his parents yet, avoid calling and getting any recipes from his mother. It may make him uneasy that you’ve taken the initiative to contact his ‘rents without his knowing.

Guys will never say it, but they are suckers for sweet love notes just as much as women are. Being romantic with your man is as simple as jotting down a note that says you love him or are thinking about him, and leaving it somewhere he’s sure to find it.

While text messages in and of themselves are another way to be romantic, it’s not the same as a handwritten love note. You don’t have to write him a romance novel, because he may not read it all. Just a few sentences on a Post-It or piece of scrap paper will let him know that you’re into him and that you care. Bonus points for hiding it, so that he finds it months later.

3. Kiss Him Deeply For No Reason at All

Kissing awakens a man’s desire for sex (which the Bad Girls Bible is all about) and is an often overlooked romantic gesture that can make a big impact. Once a couple has been in a relationship for some time, deep and sensual kissing is frequently reserved for “sex night” and is replaced during the day with hello and goodbye “pecks.”

Get him thinking about you by kissing him deeply at random times, for no reason other than to kiss him.

Walk up to him and kiss him slowly, deeply and passionately. Act like nothing in the world is more interesting to you at that point in time than kissing your man, even if it’s only for a few seconds. You might catch him by surprise, but he’s not likely to stop before you do. For more tips on kissing, check out this detailed guide and video we put together on the very subject.

4. Organize a Weekend Away For the Both of You

When learning how to be romantic, you can up your game by organizing a relaxing weekend away for the both of you. Often, day to day life gets in the way of a relationship and can keep both partners from being romantic as much as they’d like. Getting away together can help you reestablish your connection with each other and bring you closer.

If you have the money, plan a posh getaway on the beach, or go the inexpensive route and get a hotel in the next town over for a single night. It doesn’t matter so much where you go — the idea is to change up your surroundings, unplug from life and focus on each other for a little while. Speaking of surroundings, here are 14 excellent locations to have sex in.

5. Use His Favorite Moves In Bed

When you go out of your way to do something he likes sexually, say giving him a blow job (you’ll learn everything you need to know in this video) he will often see it as a romantic gesture.

Make a point to learn what he likes best in the bedroom by judging his reaction to certain moves. Mentally take a note of things that make his toes curl, and when you’re feeling like being romantic, use those moves to blow his mind. Here are over 100 sex positions with models demonstrating each position to give you some ideas.

6. Play Video Games or Watch the Game With Him

One of the best things you can do regularly when you’re learning how to be romantic is to engage in activities he enjoys, even if you don’t enjoy them yourself.

For example, next time he fires up the Xbox console, challenge him to a round of his favorite game (and the winner has to take the other out to eat!) Or when he’s relaxing on the couch watching the game, sit next to him for a snuggle without suggesting he change the channel. Bonus points if you cheer on his favorite team! He’ll be surprised and pleased that you’re taking time out of your day to do something he likes.

7. Treat Him to Dinner Occasionally

While most guys don’t have a problem being chivalrous and paying for their lady’s food, it’s nice every once in awhile if she picks up the tab. One of the best tips on how to be romantic is to treat him to dinner out on a night when neither of you feel like cooking.

When the bill comes, gently slide it over to your side of the table, smile at him and say, “I’m picking it up tonight, thanks for being an awesome date!” Or, you could sneak away to the bathroom and pay the bill discreetly on your way back. Either way, springing for the meal shows him that you appreciate and care about him.

8. Give Him Your Undivided Attention

While it’s difficult to give someone your undivided attention with today’s technology, making the effort to put your smartphone down is one of the most effective ways to show your partner you’re totally into them.

Turn your ringer on silent during dinner, and avoid the temptation to pick it up and check for the latest Facebook or text messages.

Not only will he see this as a small sign of you being romantic, he may decide to follow suit and put his own phone down in the process. Nothing beats distraction free, quality one-on-one time with your man!

9. Let Him Have Some Guy Time

No matter how much your man cares about you or wants to spend time with you, he needs “guy time” as well.

If he wants to go out with his friends, don’t make a big deal about it…unless it’s every single night obviously.

Use the time well to tackle some things you’ve been meaning to get done, or to get some quality “girl time” yourself. If he hasn’t been out with his buddies in awhile, make the suggestion that he go, or invite his friends over for a night of poker or watching the game while you sneak away undetected.

He’ll love that you don’t have a problem with him being himself and hanging out with his pals, and he’s more likely to get closer to you as a result. His buddies will probably even tell him how lucky he is to have such a cool partner in crime.

While some guys can tolerate demanding or uptight women, others can’t.

However, it’s safe to say that most guys prefer when a woman is easygoing as opposed to hard to please. Being easy to get along with is different from playing hard to get — you can be a playful tease without being a diva.

When he makes an effort to woo you or you can sense he’s learning how to be romantic with you, give him some slack if he doesn’t get it perfectly right. He may take you out on a date that you’re not super thrilled with, or buy you a present that just isn’t up your alley. Be easygoing and just enjoy the fact that he’s putting his best foot forward instead of being critical of what he’s trying to do. Roll with the punches and be up for anything.

Guys love it when a woman is chill and ready for whatever…provided she’s not a complete walkover.

Note: This does not apply to going out to eat. When he asks you want you want for dinner, avoid saying, “I don’t know, whatever you want” in an effort to be easygoing. Just let him know what you want, and he’ll take you there. He’ll love that you’re direct and he doesn’t have to spend 20 minutes suggesting places to you while he’s starving.

These are just a few tips on how to be romantic with your man.

Even little things can be really romantic if you just use your imagination and put in a little effort. Men may have a bad reputation for not being romantic, but the truth is that many guys love being the recipient of romantic gestures from the women they care about.

Show your man how into him you are by going the extra mile to show him your romantic side every now and then. Your man will dig it, and your relationship will be better for it!

The 15 Best Places To Have Sex…Prepare For Naughtiness
15 Ways To Seduce A Man & Make Him Crazy For You!