Sometimes all it takes to turn a steamy, care-free sexual encounter into a truly cringe-worthy experience is a misplaced elbow, some misjudged dirty talk, or the disappointing trumpet of an unexpected fart.

With many of us having sex about 80 times per year, a bit of bashfulness is inevitable. But what does it take for the average person to feel awkward, embarrassed, or downright ashamed during their most intimate physical encounters?

To find out, we asked 1,012 people to describe their most memorable embarrassing sexual experiences and secrets. 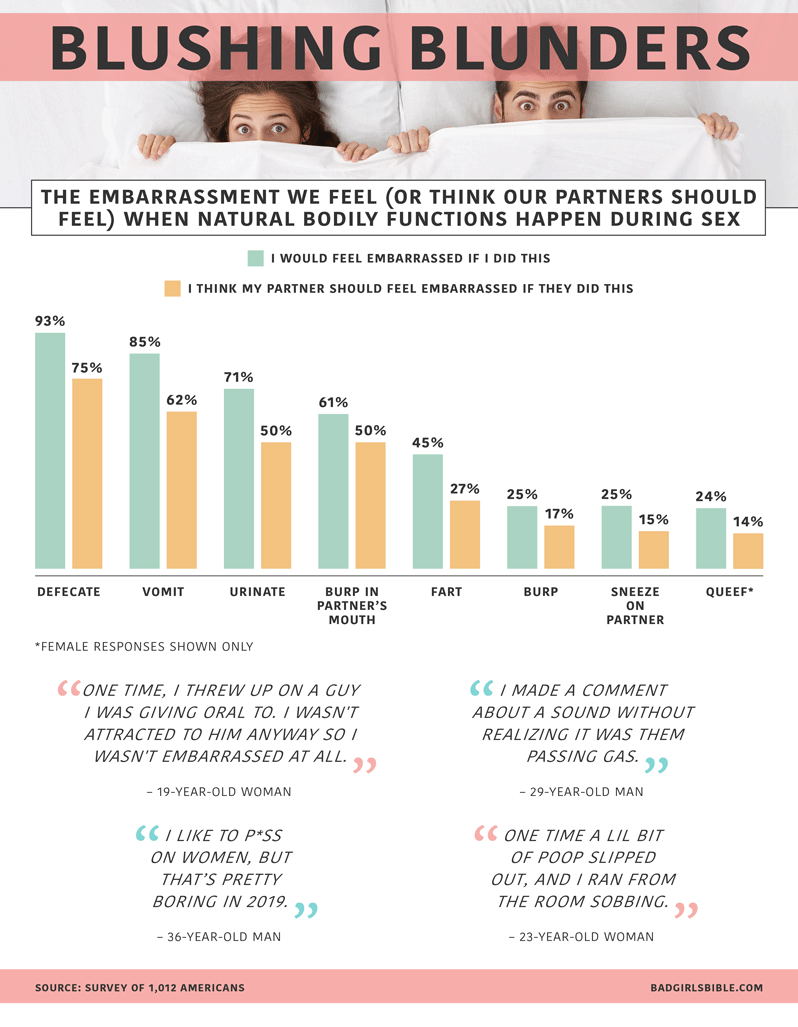 I have a very sensitive gag reflex and I once vomited on the beach while giving head. It wasn’t on him, so I just buried it in the sand, washed my mouth out with water, and kept going. — Jasmine, female, 20.

The biggest difference between men and women was in their opinion on farting. Fifty-two percent of women said they’d be very or extremely embarrassed if they let rip during sex compared to 37% of men. Another air-related mishap we asked about was vaginal flatulence, also known as queefing, or, less romantically, pussy farts. One in 4 women said they find queefing really embarrassing, whereas only 14% of their partners think it’s a valid reason to feel self-conscious.

The good news here is that every mishap we asked about revealed that we feel more embarrassed about the concept of experiencing it than our partners believe we should feel. Farting, sneezing, and queefing were the ones most of us took too seriously.

Aside from the fact that accidents happen, it’s worth remembering that one person’s fear is another’s fetish. By looking at search engine data for queefing, we see signs of the fear… 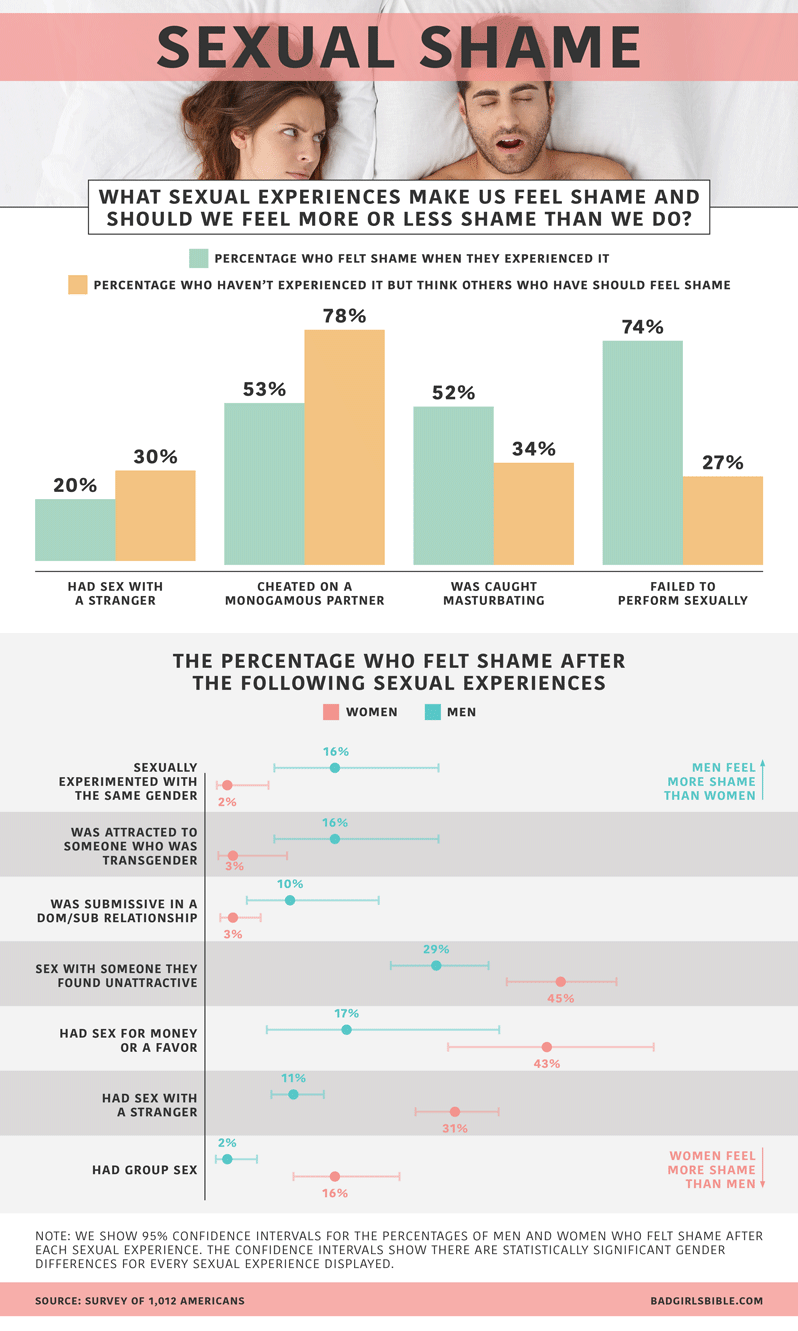 Farting (front or rear) during sex is momentarily embarrassing, but some sexual experiences and inclinations can create a feeling of shame – arguably a much darker and more destructive emotion than embarrassment.

We used a pilot survey with an open-ended question about sexual shame to establish a shortlist of sexual acts and attitudes. We then asked our full panel of 1,012 Americans which of the 11 things we’d shortlisted applied to them and which, if any, they felt ashamed about.

Other acts are the opposite way around, with more outsiders feeling they’re shameful than the people involved. For example, 8 in 10 people said that cheating in a monogamous relationship is shame-worthy, whereas 5 in 10 self-confessed cheaters said they felt no shame at all.

Women were significantly more likely than men to say group sex and sex with a stranger made them feel ashamed. Sex for money or favors, which 1 in 10 women and 1 in 20 men said they’d offered, was another act which typically made women feel more ashamed.

But “shame” isn’t always the right word for what people feel about their sexual experiences. It’s a complicated emotion and much of the negative feeling seems to come not from the belief that what you do is bad, but that others believe it’s bad.

I used to trick (work as a prostitute). My friends know this and it’s not really embarrassing, but if my boss knew, I think it would be pretty embarrassing. Actually, I don’t think that’s the right word. I wouldn’t be embarrassed as much as being in fear of consequences resulting from people finding out that I used to have sex for money. I don’t feel ashamed, and I don’t feel like I should be judged, so really when that situation arises it’s more of an anger thing than an embarrassment thing. — Cathy, female, 41.

For others, sexual acts like group sex create an entirely different type of regret. 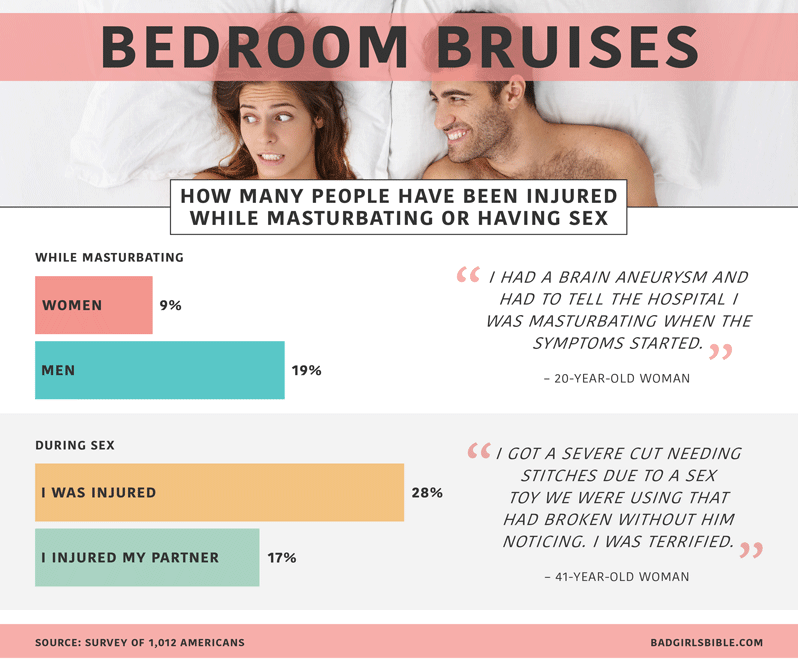 I scratched myself, but continued and made it worse by removing a layer of skin from my penis. — Andrew, male, 44.

And some are unambiguously worthy of a trip to the emergency room.

My cervix was ‘cracked,’ which is apparently a ‘thing.’ I was prescribed antibiotics and told to avoid sex – especially rough sex. — Laura, female, 39.

My partner was trying to mount me while in a sling and he fell on top of me. The sling broke and we landed on a concrete floor and I cracked my scapula. It required surgery – I told the hospital staff the truth. — Peter, male, 51.

When I was young I lost something ‘inside’ while pleasuring myself. My mom took me to the hospital and I was questioned about it. I told them what I’d been doing and that it accidentally slipped. It was rather embarrassing. — Jen, female, 33.

Our results also suggest that sometimes when we suffer a minor injury during sex we keep quiet about it to avoid ruining the moment or feeling embarrassed. Twenty-eight percent of people said they’d been injured during sex but only 17% said they’ve ever been aware of their partner becoming injured. So 11% of us are in blissful ignorance of the sexual suffering we’ve caused our partners. 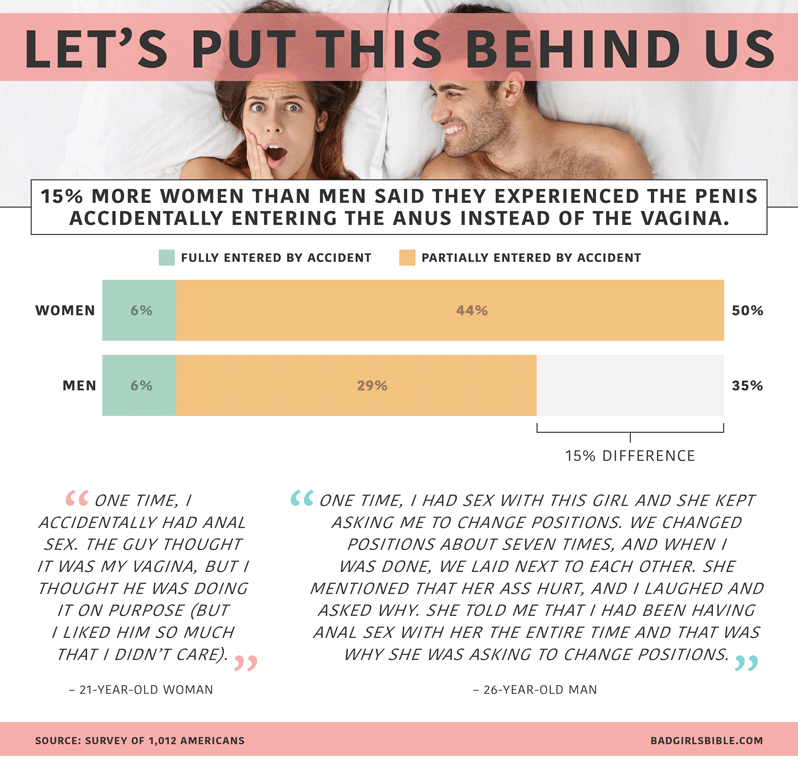 We took a deep dive into one particular sexual mishap – the unfortunate moment when a man’s penis slips into the woman’s anus instead of her vagina. Half of women said they’d been on the receiving end of this slip-up, compared to 35% of men on the giving end. The difference of 15 percentage points suggests some men either don’t realize or don’t want to admit they’ve used the backdoor without permission. 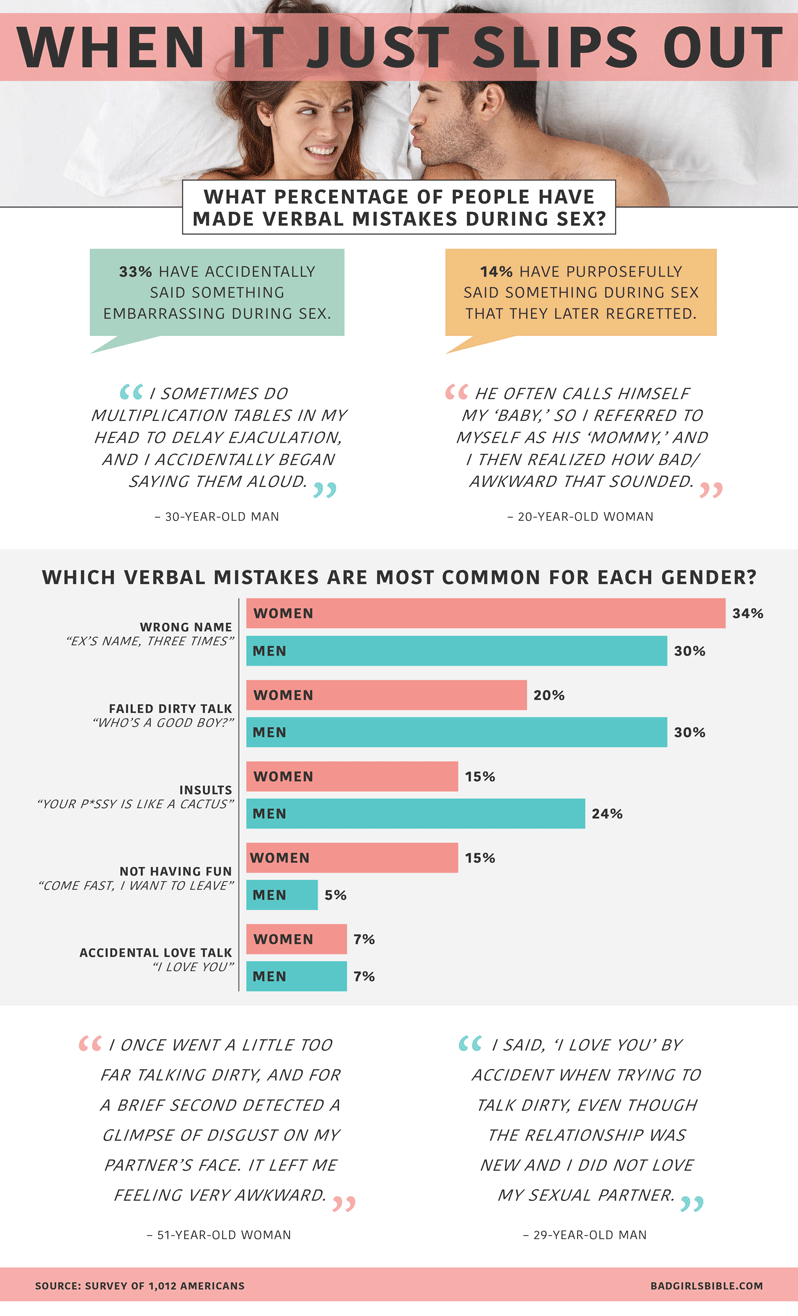 One in 3 people has said something highly embarrassing during sex. Most of the time it’s a simple slip of the tongue. For example, the most common mistake (32% of embarrassing statements) is saying the wrong person’s name.

I misspoke and called her the name of a cartoon character that I’d been fantasizing about. — Paul, male, 20.

I was thinking, ‘Oh baby’ and at the same thinking, ‘Oh Marty’ and it came out as ‘Oh Barbie’…That’s actually happened a few times with a few different men. — Lisa, female, 51.

Women were slightly more likely than men to say they uttered the wrong person’s name (34% vs. 30%) but men failed at deliberate dirty talk more often. It’s hard to say which is worse: having a brain fart and saying the wrong thing or constructing what you think is the perfect sexy comment, only for your partner to laugh, cry or get very mad.

My long-time boyfriend woke me up in the middle of the night and said ‘check this out.’ He had a butt plug in. I was extremely weirded out. — Frances, female, 38.

It’s hard to talk your way out of calling your partner a dirty bitch, but if you’ve said the wrong name, you might have an excuse: Pavlovian conditioning. According to Dr. Jim Pfaus, a professor of neuroscience and psychology, being in a state of euphoria can bring to mind past pleasurable experiences and the people you shared them with. Another theory is that we think in semantic categories, which is why we confuse friends for other friends, siblings for other siblings, and, it seems, romantic partners for each other. It’s a logical idea – in most cases… 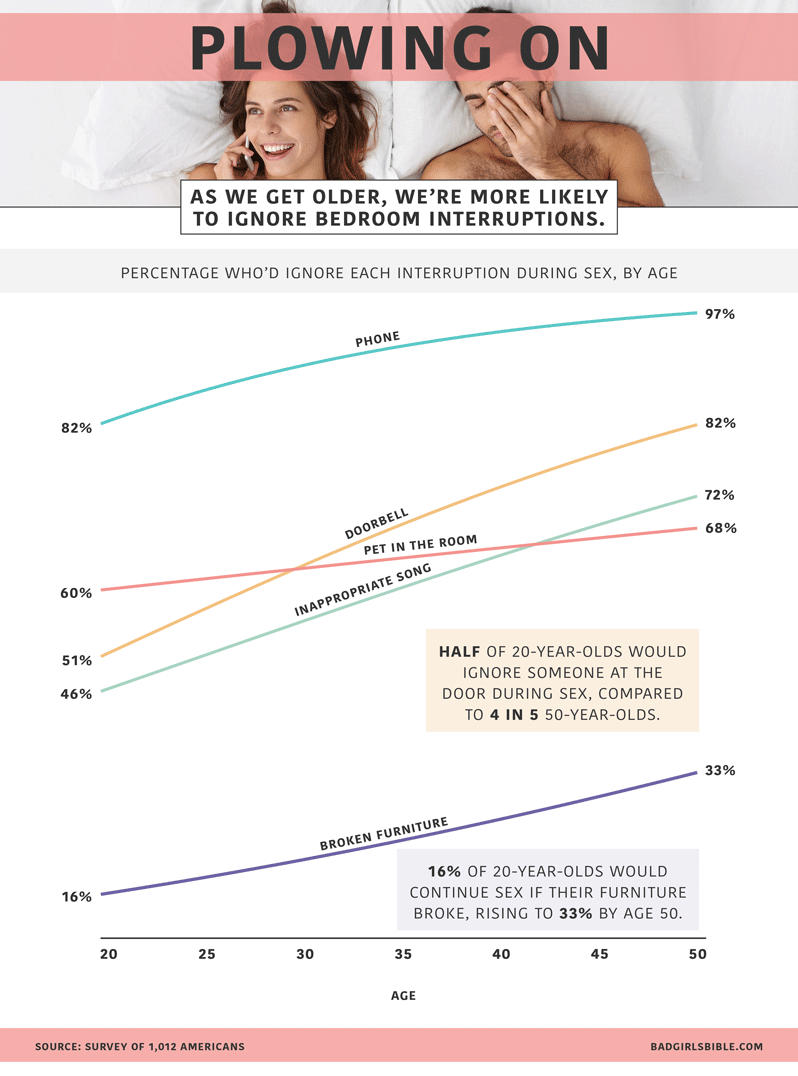 We wanted to know what type of interruption it would take to force the average couple to halt sex midway through, so we asked our survey takers what they’d do if faced with five embarrassing inconveniences.

Ninety-one percent of people said they’d ignore a phone call and carry on having sex. Someone at the door ringing the bell would be a bit harder to ignore, but the majority (66%) would plow on. And most people could look past an inappropriate song breaking the mood (60%). It’s only when faced with broken furniture that most people (78%) would call it a day.

Our results suggest that the older we are, the more likely we are to put up with these kinds of distractions. One possible explanation is that people typically have sex less often as they age (dropping from 112 times per year for people aged 18–29 to 69 times for 40–49-year-olds), and therefore are less willing to call a timeout.

The interruption response that was least dependent on age was what we do when a pet enters the room during a vigorous bout of lovemaking. Most people would carry on (67%) but 27% would have to put the pet out of their eye line before getting back to the action.

One time, I was having sex with a guy I was dating at his house in the living room and his mom caught us. She yelled at me in Spanish (they’re Mexican) so I didn’t understand what she said, but she grabbed me by the hair and yanked me to the door and told me to ‘get out.’ I left crying and the guy ran after me apologizing profusely but I couldn’t look at him the same after that. That was my most humiliating sex experience. — Crystal, female, 27.

Sex is a glorious, messy exercise. In its best moments, we writhe in synchronized passion with our partners, our emotions and bodies laid bare. But at its worst, we experience excruciating feelings of awkwardness, embarrassment, and even shame. The most extreme feelings of shame and dissatisfaction that emerged in our anonymous survey takers’ answers seemed to relate to desires and behaviors they keep secret from their partner.

But for the most part, the confessions and opinions of our survey takers show that we’re usually harder on ourselves during embarrassing moments than we need to be. Most of us are willing to plow through awkward moments for the sake of sexual passion, whether it’s a pet staring us down or a postman at the door. And when there’s no talking your way out of a sexual slip-up, you might as well see the funny side…

We’d love for you to share our research on sexual embarrassment for noncommercial purposes. Please link to this page so that we are credited. If you’d like to cover this research and are interested in reading more of our respondents’ experiences, get in touch via [email protected].

In July of 2019, we surveyed 1,012 Americans aged 18 to 79 about their memories of and opinions on embarrassing sexual experiences. Men and women were equally represented in our survey sample. Estimates of shame are shown with 95% confidence intervals to express the relative uncertainty of the estimates.

We recruited our survey respondents using an independent academic research platform. To avoid bias, participants did not know the survey was conducted for BadGirlsBible.com, nor did they know the full details of the survey topic ahead of time. First names have been changed to protect the identity of the embarrassed.

Send Nudes: 1,058 People On How Often They Send & Recieve Nudes
The Stars Are Falling – Public Opinion on Celebrity Sexual Harassment