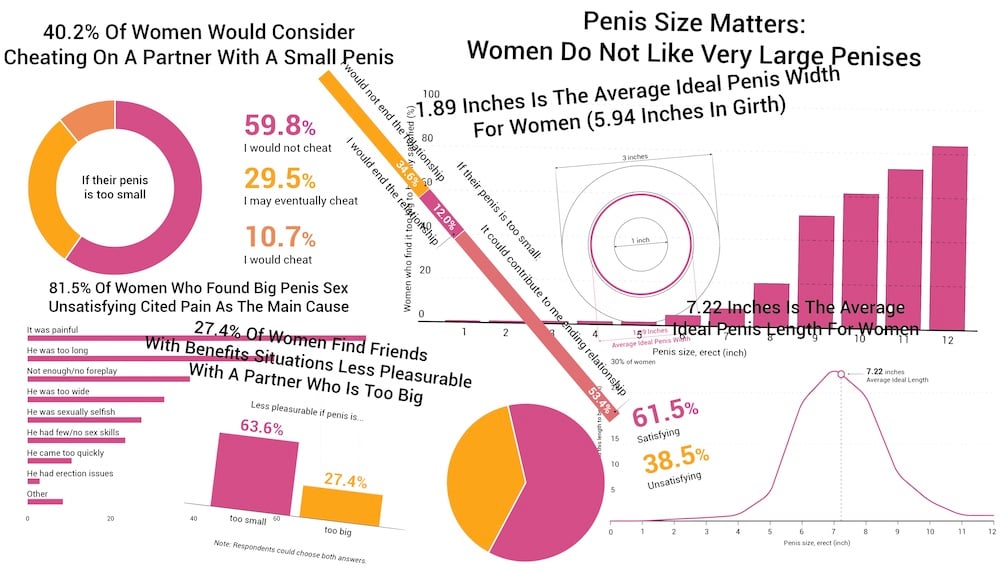 We recently surveyed 1,387 sexually active women about erect penis size and asked them:

How small is too small for a woman?

We also discovered how big is too big for women, whether penis length is as important as penis width for women, and what makes small penis sex so unsatisfying.

This is what we discovered…

3. 64.5% of women find that penis length & width are equally important for sexual satisfaction.

6. “I couldn’t feel their penis inside me” is the biggest reason (79.9%) why women found small penis sex to be unsatisfying.

7. Other sexual skills are crucial to making sex pleasurable for women if you have a small penis.

Note: You can find our methodology section at the end of this study.

Penis size is a common source of anxiety for men, with many worried about how small is too small.

Added to this frustration, we could find no good data or study available on what women consider too small (or too big), until now.

For every possible penis size, in 1 inch increments, we asked women a simple question:

Is this penis size enough to fully sexually satisfy you? 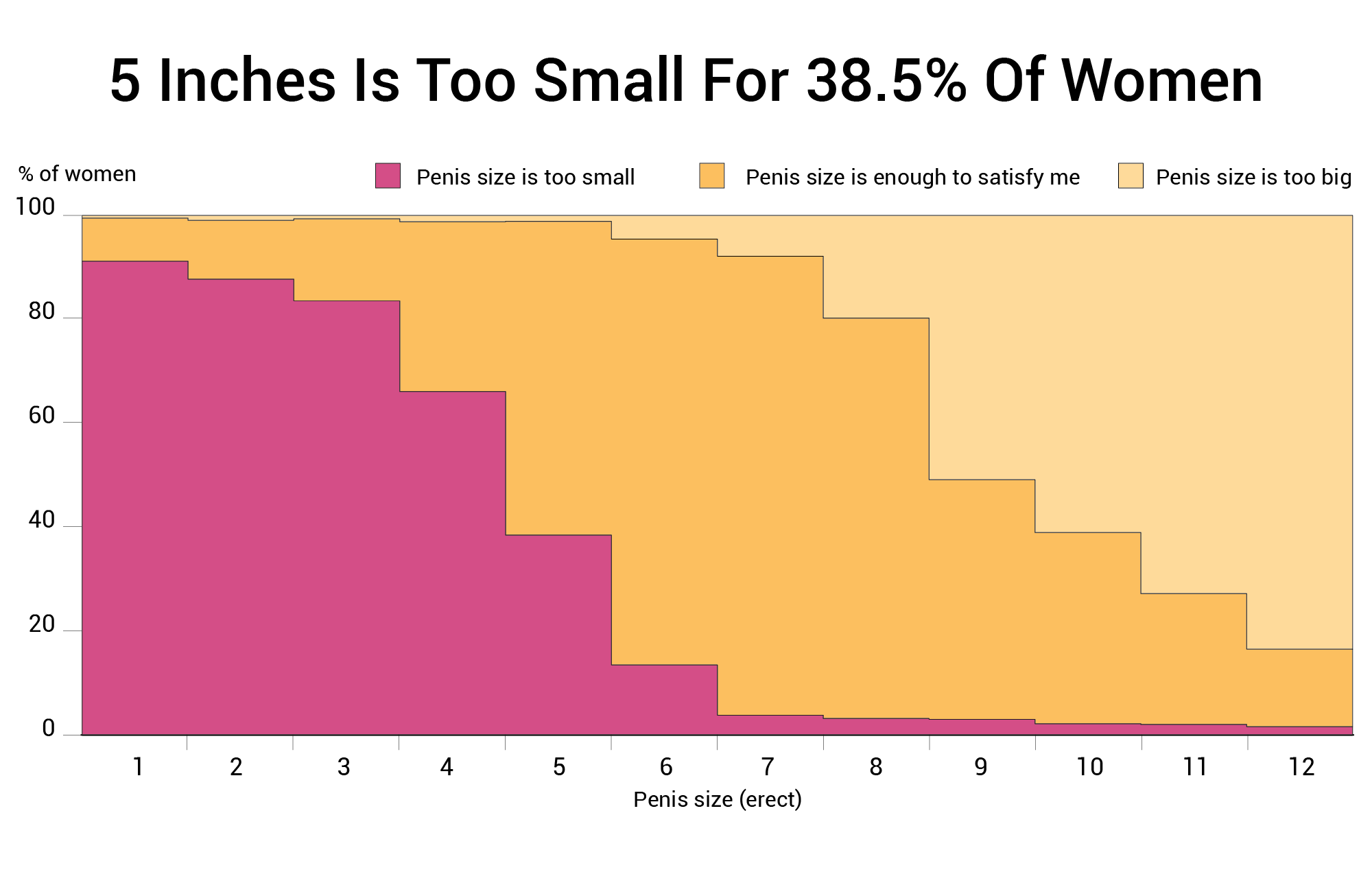 As you can see from the graph above, when faced with increasingly small penis sizes, women find them less and less sexually satisfying. Breaking out these figures in detail:

We can see from these results the exact percentage of women who consider each penis size to be too small for them to be fully sexually satisfied.

We hypothesized that women also find some penis sizes to be too big to sexually satisfy them and instead lead to painful, uncomfortable sex.

When we surveyed our respondents on how big is too big in regard to penis size, our results were very interesting:

These results prove that bigger is not always better. In fact, the opposite is true, penis sizes of 9 inches or over are too big for more than half of women.

As we discovered in our study, Does Size Matter, the Goldilocks penis size range or ideal penis size range is between 6-8 inches (18.34 cm) in length. Women find anything bigger or smaller than this to be far less sexually satisfying.

3. 64.5% Of Women Find That Penis Length & Width Are Equally Important For Sexual Satisfaction

Popular discourse on penis size amongst men often focuses solely on penis length, but is this the only aspect of penis size that women consider?

We wanted to investigate whether or not penis width is an important factor to women for sexual satisfaction.

It turns out that it’s very important. 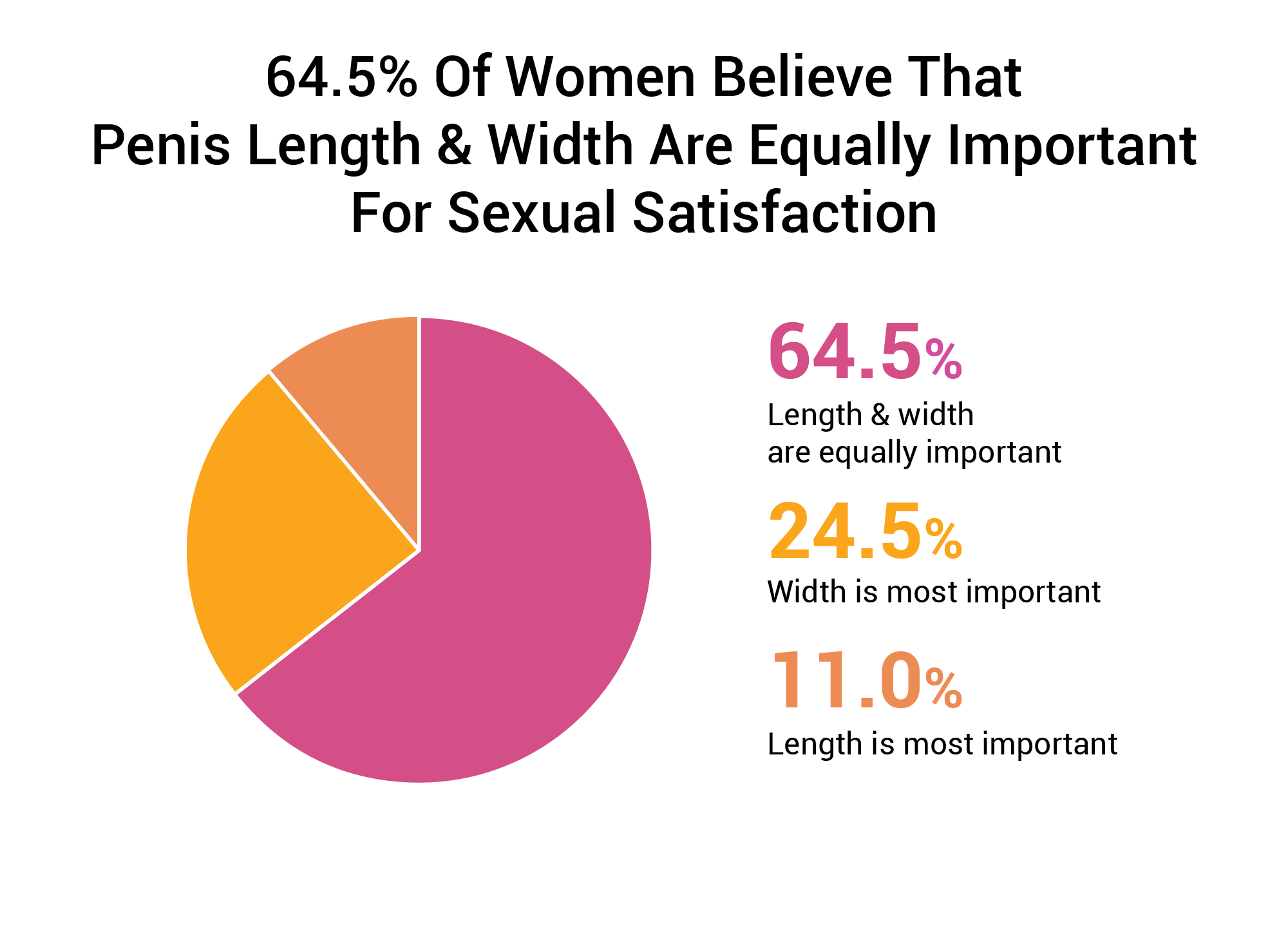 As you can see in the graph above:

These findings make it clear that almost 9 in 10 women (89.1%) find penis width at least as important as length for sexual satisfaction.

Next, we investigated whether many women have had sex with a partner that they considered to have a small penis. 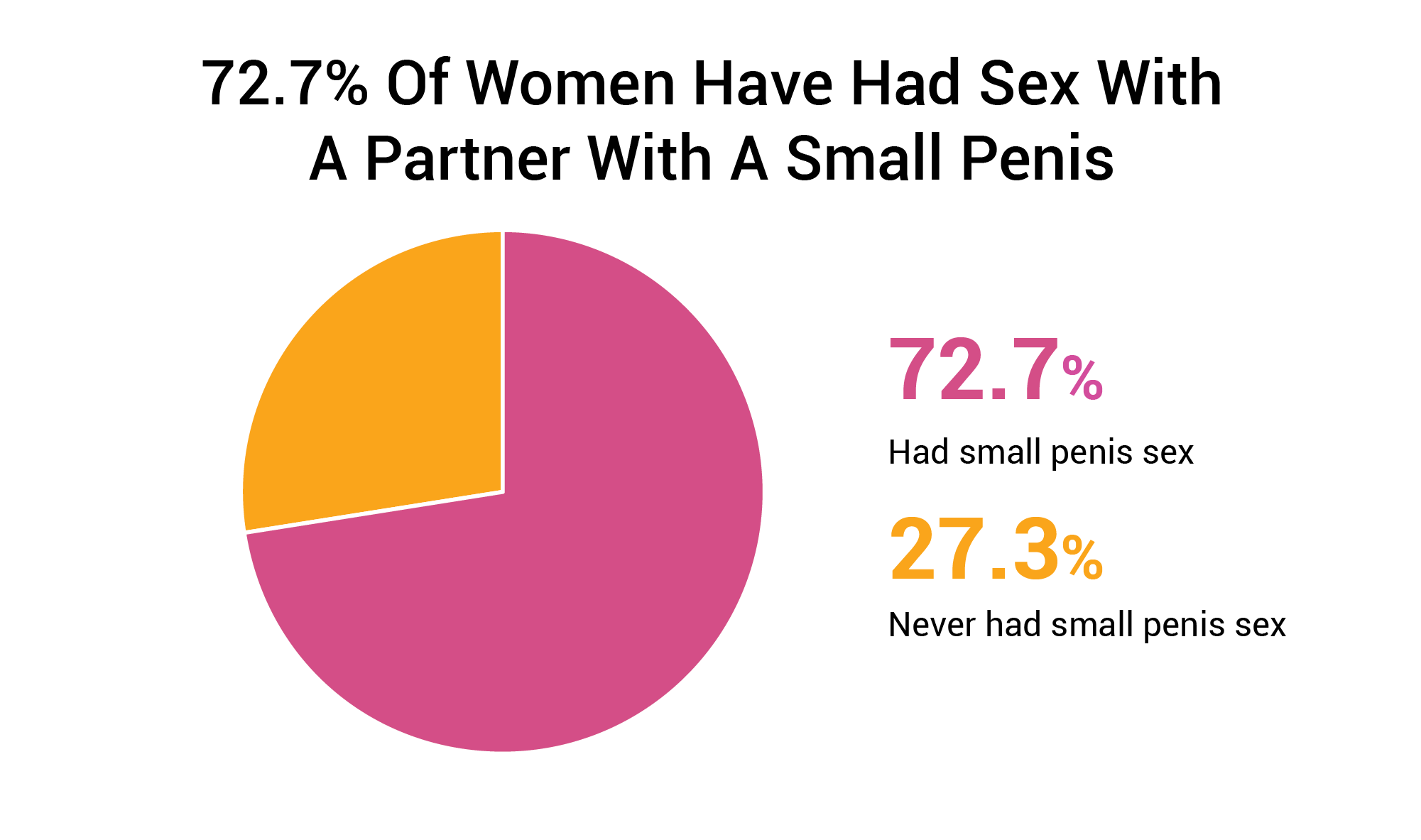 72.7% of our female respondents reported having previously had sex with a partner they found to have a  small penis.

In their most recent small penis sexual experience, they estimated their partner’s penis size at 3.79 inches (9.63 cm) on average. 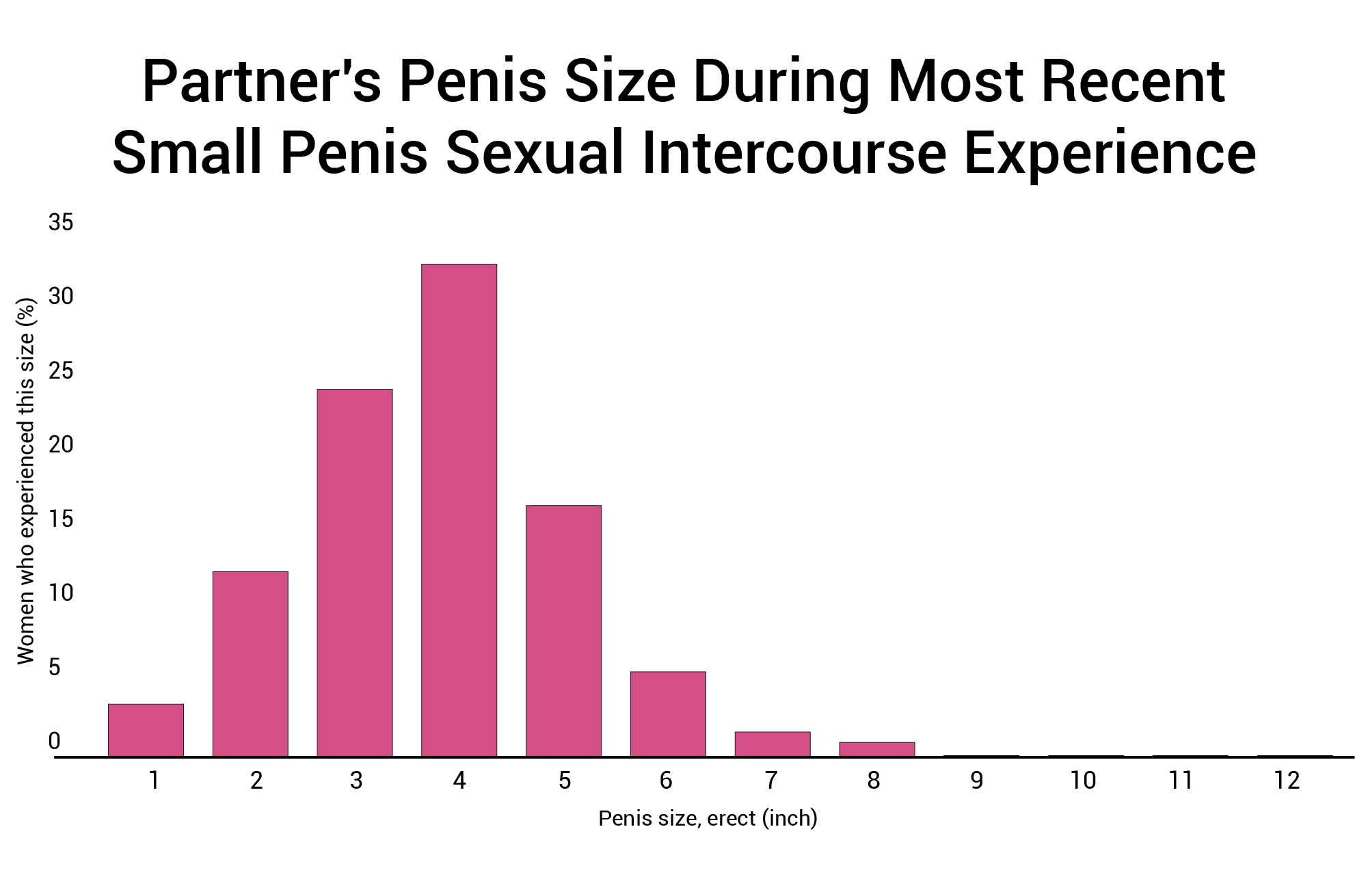 For comparison, in 2020, a review of over 20 studies on penis size found that the average erect penis is 5.1-5.5 inches (12.9-13.97 cm) in length. After taking volunteer bias into account, the researchers concluded that the average erect penis size is probably towards the lower end of this range [1]. All measurements in this review were measured by researchers and not self-reported.

5. 79.5% Of Women Find Sex With A Small Penis To Be Unsatisfying

Next, we wanted to investigate whether this group of women found their most recent small penis sex experience to be satisfying or unsatisfying. 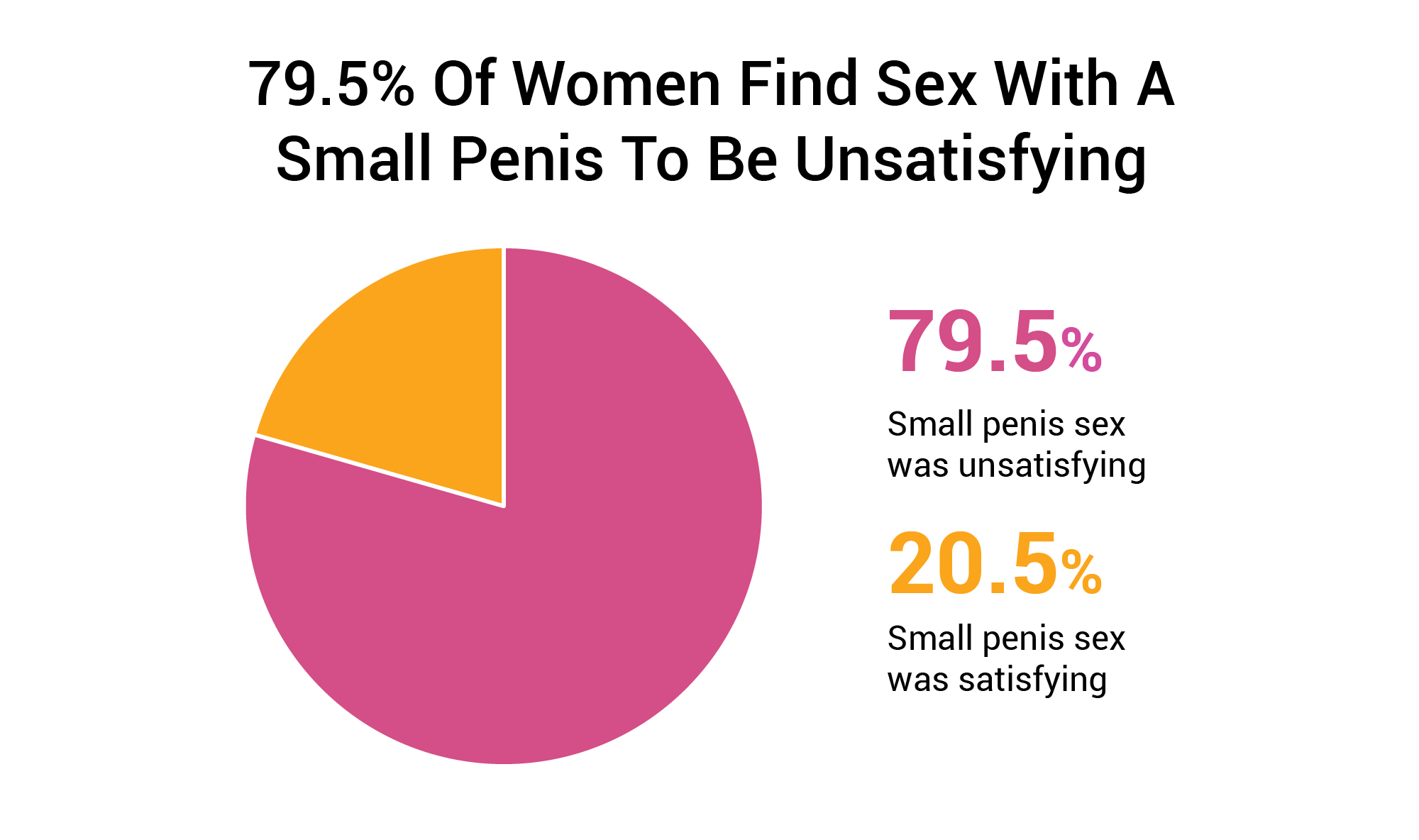 We can clearly see that the vast majority, 79.5% of women found their most recent small penis sex experience to be unsatisfying.

6. The Biggest Reason (79.9%) Why Sex With A Small Penis Is Unsatsifying For Women: “I Couldn’t Feel Their Penis Inside Me”

We wanted to get clear data on why so many women found their most recent small penis sex experience to be unsatisfying. 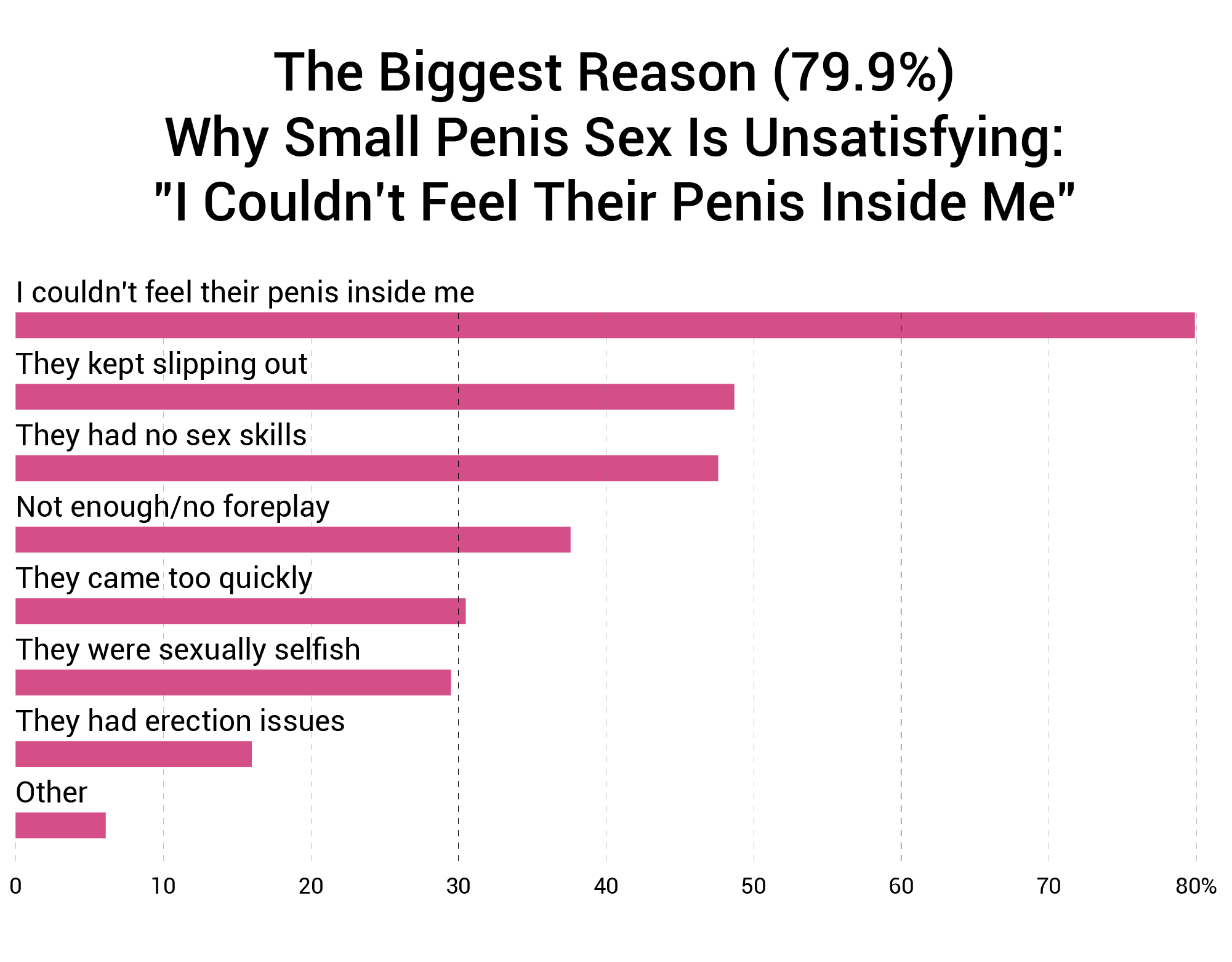 The results were stark and clear. The two most cited reasons by women for unsatisfying sex with a partner with a small penis are:

Both of these reasons directly relate to the size of their partner’s penis.

Keep in mind that there were additional reasons why women found their most recent small penis sex experience to be unsatisfying:

6.1% of women reported “Other” as their reason for unsatisfying sex with their not well-endowed partner. These “Other” responses included:

We’ve learned that the 2 most cited reasons by women for unsatisfying small penis sex relate directly to their partner’s penis size. However, other factors unrelated to penis size such as a lack of sex skills often play a role in unsatisfying sex.

7. Other Sexual Skills Are Crucial To Making Sex Pleasurable If You Have A Small Penis

Only about 1 in 5 women (20.5%) found their most recent sexual experience with a not well-endowed partner to be satisfying. 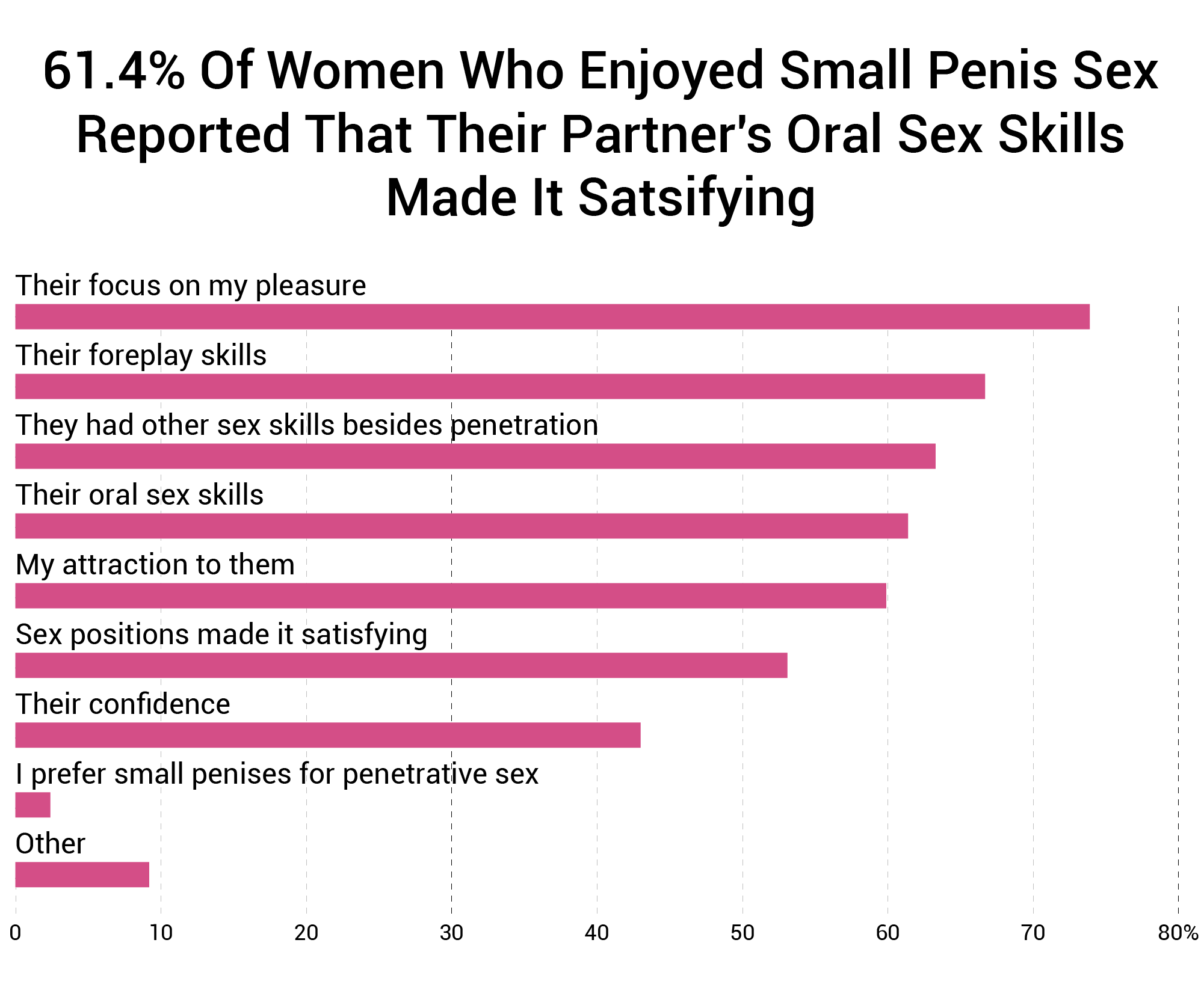 Many of the reasons reported by women for satisfying sex with a partner with a small penis relate to their other sexual skills:

Notice that many of these sexual skills do not require a large penis.

However, some reasons focused on how the woman felt about her partner:

Interestingly 2.4% of women reported that they prefer a partner with a small penis for sex. That’s about 1 in 41 women who prefer small penises for sex.

9.2% of women choose “Other” as the reason why they found small penis sex satisfying. These “Other” responses included:

Our survey discovered that a 5 inch penis is too small for 38.5% of women.

In the course of our research, we discovered that having a very large penis is also not ideal. 50.8% of women find a 9 inch penis to be too big to be sexually satisfying.

We further explored how much women really care about penis size in our other study, Does Size Matter. In it, we investigated how penis size matters to women in relation to:

We began this survey by collecting basic demographic information. Those who had never received penile-vaginal sex were disqualified, as were non-female respondents. All respondents were over the age of 18 with a mean age of 42. After this filtering process, we were left with a total of 1,387 respondents:

These remaining participants were asked a variety of questions to assess their personal sentiments, experiences and preferences on the topic of erect penis size in relation to penile-vaginal sex.

Our survey relied on the anonymous recollections and preferences of our study participants. While they were encouraged to tell the truth and accurately represent what they had experienced, the data is nevertheless self-reported and there is the possibility of some inaccuracy.