If you're new here, you may want to get my discreet newsletter to learn how to make him sexually obsessed with you and only you. Click here to get it. It's free. It's discreet. It's 100% private.

Guys sometimes obsess over penis size (and some women do too). About one in five men are unhappy with the size of their penis, and they constantly wonder, “Does penis size matter?” Tell your guy that worrying about penis size doesn’t change things. What does make a difference is how your guy uses it. 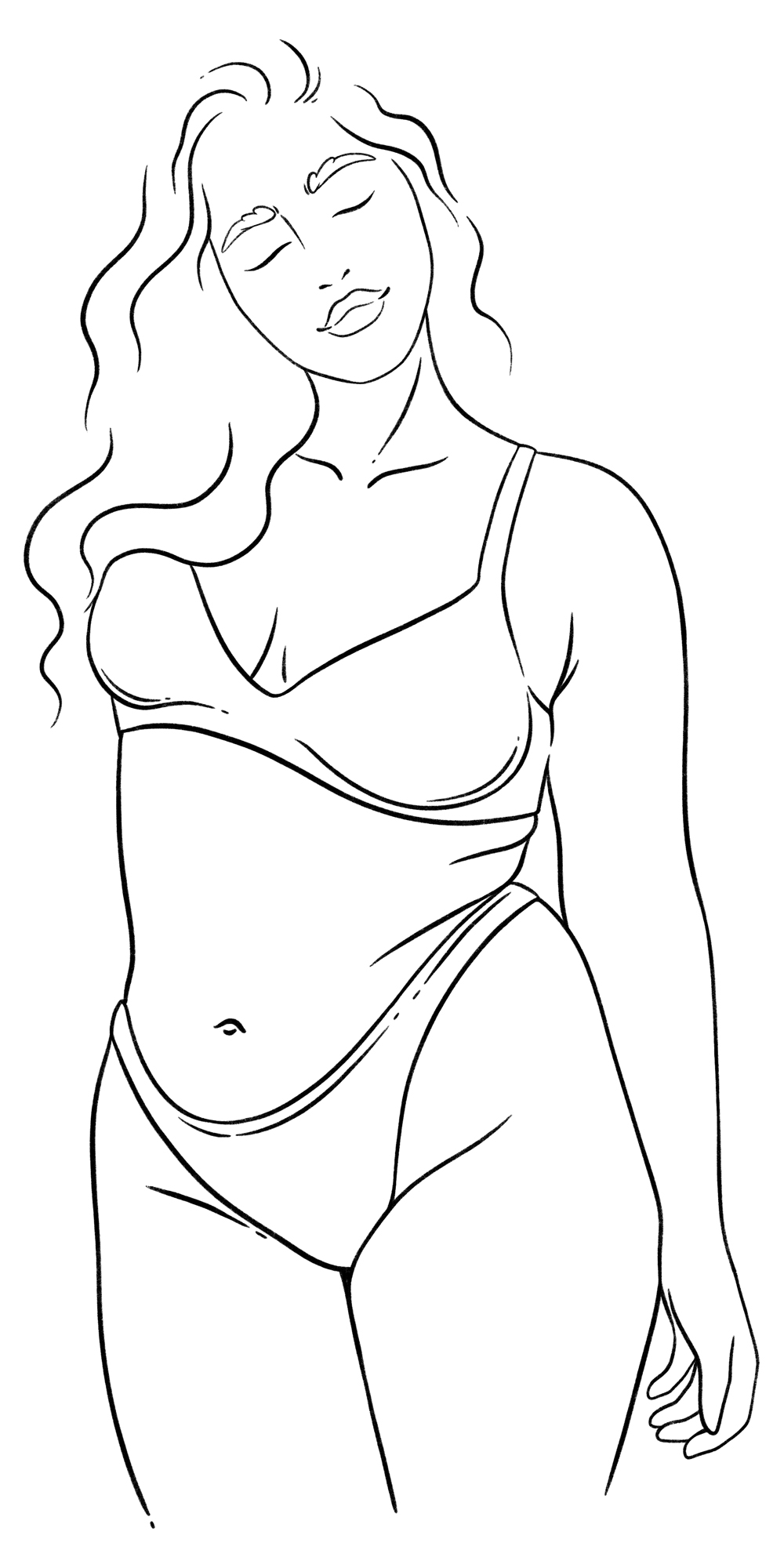 Every penis is different, and each has different characteristics. If your guy is wondering if his size matters let him know that at the end of the day, penis size comes down to personal preferences.

Evolutionarily speaking, penis size does matter because the human penis is the largest of any other primate’s proportionally speaking. This suggests that women selected men with larger penises to reproduce with, called sexual selection. However, the penis should still be proportional to the body for the ultimate attractiveness and desirability.

Fears and Insecurities Guys Sometimes Have

Men who are unhappy with their penis size and constantly ask themselves, does size matter, might have pornography to blame. Locker room sizing up could be another factor. Men tend to link penis size with masculinity, virility and overall attractiveness.

Men who feel insecure believe that women are constantly judging them. When this fear gets the best of them and becomes too great, some men will feel as if they will never find a mate.

My most powerful sex tricks and tips aren't on this site. If you want to access them and give your man back-arching, toe-curling, screaming orgasms that will keep him sexually obsessed with you, then you can learn these secret sex techniques in my private and discreet newsletter. You'll also learn the 5 dangerous mistakes that will ruin your sex life and relationship. Get it here.

Whatever the reason, some guys just feel insecure, and this insecurity often manifests itself in him questioning the size of penis. You can reassure your man by letting him know that this is a bigger deal for him than it is for you when he asks you for your opinion. You don’t want your man feeling insecure.

He might be less inclined to undress in front of you, hide his penis or just feel not good enough. This is a real shame because for most women, your most sensitive areas are your G-spot and your clitoris, and you don’t need a large penis to stimulate either one because neither of them are deep in your vagina.

When an Average or Longer-than-Average Penis is Necessary

Some women get most of their pleasure from having their A Spot stimulated, so in this case, when your guy is trying to figure out if penis size matters, it actually does.

You might not have even known (nor did he) that there was even such a thing as the A Spot. But some women report that it responds the same way the G-spot does but can feel even better (find out more about how to find your G Spot here). The A Spot is way in the back of the vaginal wall, and a guy needs an average or longer-than-average penis to reach this spot. Learn more about the A Spot here.

But if your guy is smaller, he can still reach that spot with his fingers.

Also, if you tend to have frequent vaginal orgasms, you will probably prefer a larger penis, which makes vaginal orgasms easier to achieve. You will also prefer a large penis if you tend to like to try many sex positions. Some positions, such as standing up, are easier to perform if your man has a longer penis. A smaller penis tends to keep sliding out.

You may even find that if he has a large penis, then he can be more confident in bed. Sadly this sometimes results in him making a big deal out of his “big package” which can be a real turn off.

Most Pleasure in Front of Vagina

Many women get the most pleasure from having the first third to half of the vagina being stimulated, and that doesn’t require a big penis, so when your guy asks you, if size matters in this case, then you can tell him “no.”

Plus, many women find that it painful when his penis bumps your cervix, meaning that having a long penis is not exactly a good thing.

One way he can stimulate your vagina where it feels great is by entering you from behind, or you can find your sensitive spot by being on top and leaning back.

Some women achieve orgasm through vaginal stimulation alone, but most women need some form clitoral stimulation, too.

How to Locate the G-Spot

A German gynecologist named Ernst Graffenberg discovered the G-spot. (G-spot is a better name for this area than Graffenberg spot, don’t you think?) The G-spot is only 2 to 3 inches inside the vagina, so it’s easily accessible. Here’s how to find it:

Lay down on your bed, and spread your legs, or bring your knees up against your breasts.

Insert your middle finger (use lube if necessary) into your vagina, palm of hand facing up.

Use a “come here” motion with your finger.

Feel around the top of your vaginal wall, near the opening. You should feel an area that feels different, kind of like a sponge. The G-spot is really an entire area, not just a spot.

Move your finger around, and you should feel a different sensation. That’s when you know you’ve found your G-spot.

You might even feel as if you need to pee. Some people call the G-spot the “urethral sponge.” A great position during intercourse to stimulate the G-spot is the jockey position (demonstrated here), with you on your elbows and knees.

The question of does size matter means more than just length. Many women prefer a penis with substantial girth to a long one. Men with girth can give you a fuller feeling. Plus, there is erectile tissue surrounding the opening of the vagina, which is better stimulated by a penis with larger girth because the stretching of the vaginal walls is what causes the stimulation.

If your guy has a leaner penis, he can simulate a larger one by using circular motions.

When Smaller is Better

Some women have vaginismus, which is vaginal tightness. In this case, penis size really does matter…

A smaller penis is better with vaginismus.

Vaninismus is distressing for both parties, and it is particularly painful when a man tries to push his way in, especially if he has a large or thick penis. Vaginismus is an involuntary occurrence, but it is treatable with therapy. Women with vaginismus are taught to relax their vaginal muscles. They might practice doing this by trying to insert a tampon or even small penis shaped object with lots of lube.

As therapy progresses, women then try to insert their man’s penis, and this can eventually lead to a regular sex life.

For some women who were asked if size mattered, the answer was a definite “yes.”

AskMen reported on a survey of 800 men that revealed the average penis size to be 5.5 inches long and between 4.7 and 5.1 inches in girth.

However, an article in Huffington Post posted a chart, called “The Authentic Women’s Penis Size Preference Chart,” which indicates that the ideal penis size is between 7.25 and 8.25 inches long and is 6.25 to 6.5 inches in circumference, which is considered bigger than normal by most standards. A penis less than 5 inches long would be considered a small penis.

Although women might like to look at a big penis, a larger-than-average one could prove to be too much for a woman to handle. A large penis makes oral sex more difficult, and a larger-than-normal penis might not be able to go all the way into a vagina without causing intense discomfort.

So the answer to the question, is really both “yes” and “no.” If the guy has good technique, size matters less. You might have even heard the adage, “It’s not the size; it’s how you use it.” Being with a skilled lover is probably what matters to you more than the size of his penis.

If your man is skilled with oral sex, knows different positions and even suggests using sex toys with you, you will be sure to receive pleasure from your man.

Men throughout the ages have been asking the question, “Does size really matter?” What this all boils down to is that guys shouldn’t beat themselves up over their penis size — it is what it is. Besides, different women have different preferences. So the answer regarding whether size matters is that it all depends. What matters to a woman is the skill, the passion and the love her partner feels for her.

I put together this in-depth, step-by-step instructional video that will teach you how to make your man sexually addicted to you and only you. It contains a number of oral sex techniques that will give your man full-body, shaking orgasms. If you're interested in learning these techniques to keep your man addicted and deeply devoted to you as well as having a lot more fun in the bedroom, then you may want to check out the video. You can watch it by clicking here.