Playing the game, Would You Rather, is a great way to flirt with a guy you’ve just met. And it’s a great way to spice things up in your relationship. This game can stay tame if you stick with a funny would you rather question, or it can get quite dirty very quickly. If either appeals to you, read on…

Would You Rather is a game where you pose two choices to your guy. He has to answer by picking one. He can’t pick both answers, or he can’t say he wouldn’t choose either one. That would be no fun. Let him know that there are no wrong answers. After he picks, it can lead to a funny, interesting, or sexy discussion. And a bonus: if the question is a choice between what he wants to do sexually, then you’ll have something else to do when the game is over.

You can also combine this Would You Rather game with a drinking game. You can write down the answer you think he’ll give. If you’re right, he takes a drink. If you’re wrong, you take one. As the night goes on, the questions are bound to become funnier, crazier, and more sexual.

Keep in mind that the answers, while designed for fun and games, can also be insightful and revealing. Your guy might talk about what he really thinks when you ask a question. And it can be easier than if you just asked him straight up, especially when it comes to some of those awkward questions you should avoid asking. The atmosphere will be different, and he probably feels safer while just playing a game.

Remember, there are no wrong answers, and you aren’t supposed to judge him. But answers to questions like these may indicate whether or not he’s the right guy for you.

1. Would you rather have dinner with my parents or give up Facebook for a week?

2. Would you rather eat the hottest chili pepper in the world, the Carolina Reaper, or use sandpaper instead of toilet paper?

3. Would you rather have to dress in your warmest clothes and a parka in the heat of summer or wear only a bathing suit in a blizzard?

4. Would you rather your head be the size of a watermelon or a tennis ball?

5. Would you rather your boss catch you dancing in front of the mirror or picking your nose? 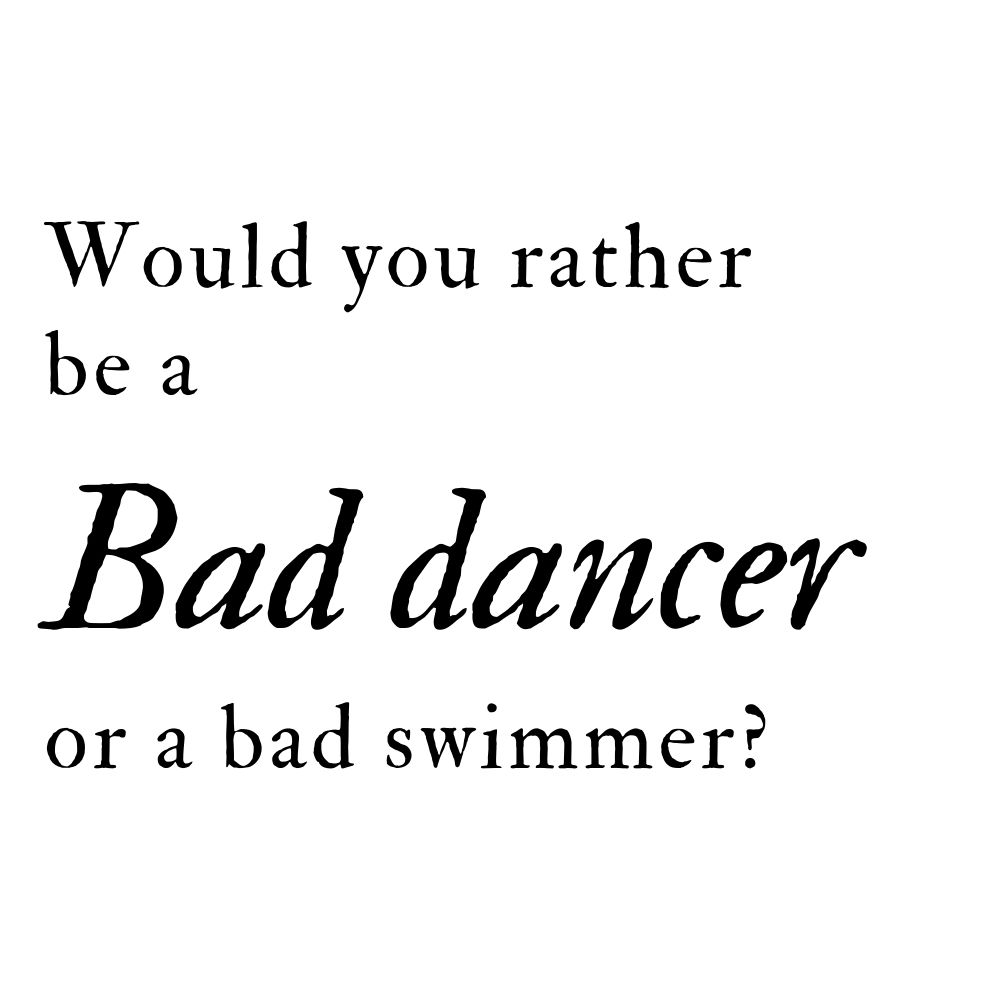 7. Would you rather not have beer for an entire year or give up TV for a whole year?

9. Would you rather be able to become invisible or to fly? 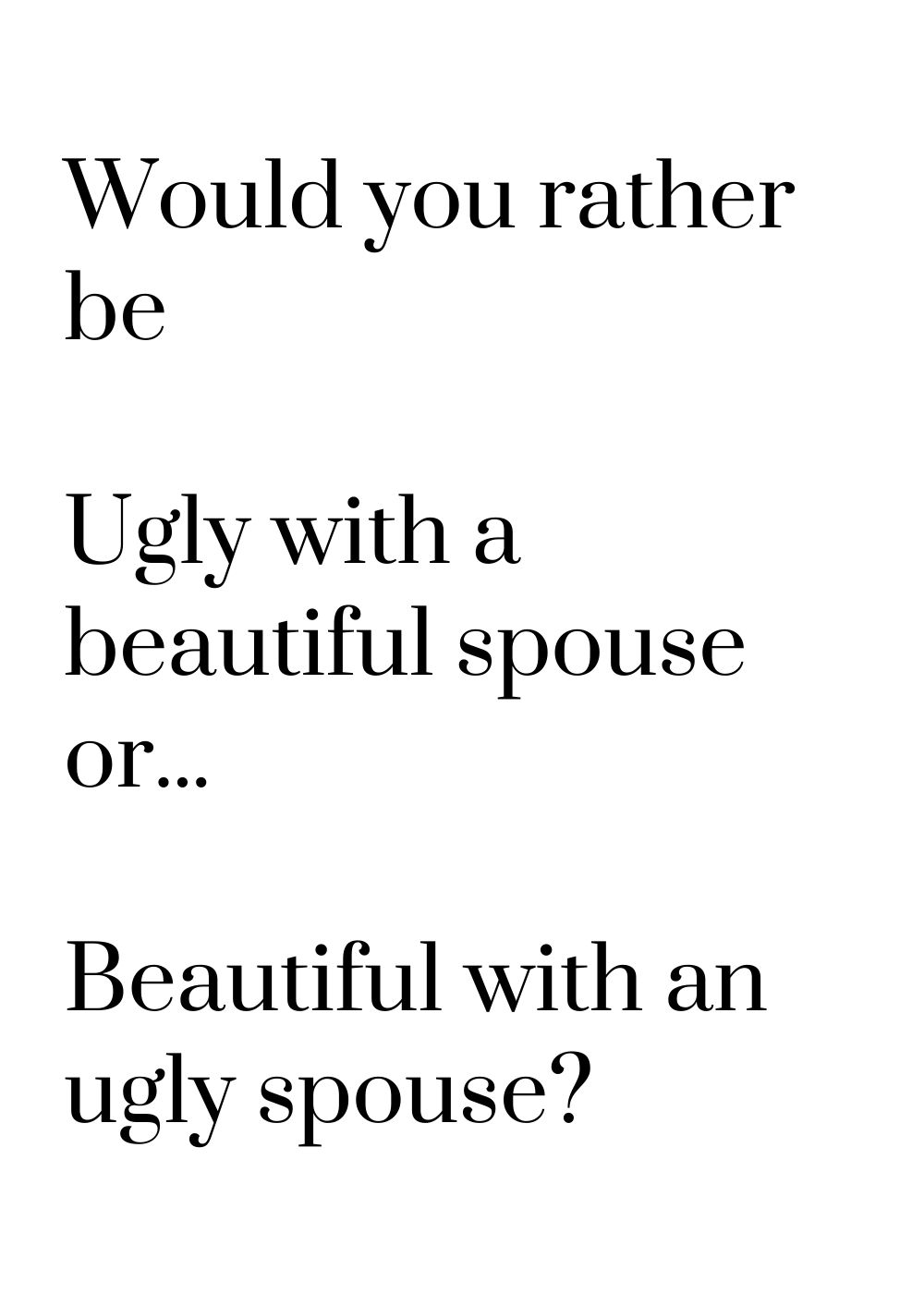 10. Would you rather be a vampire or a werewolf?

11. Would you rather give bad advice or get bad advice?

12. Would you rather have partial hearing loss or develop a bald spot?

13. Would you rather have a hangover that lasted for a week or invite me to your parents’ house for dinner?

16. Would you rather be good looking but wind up with an ugly wife or be ugly and marry a beautiful woman?

17. Would you rather have sex with someone who has bad breath or body odor?

18. Would you rather be a masculine woman or a feminine man? 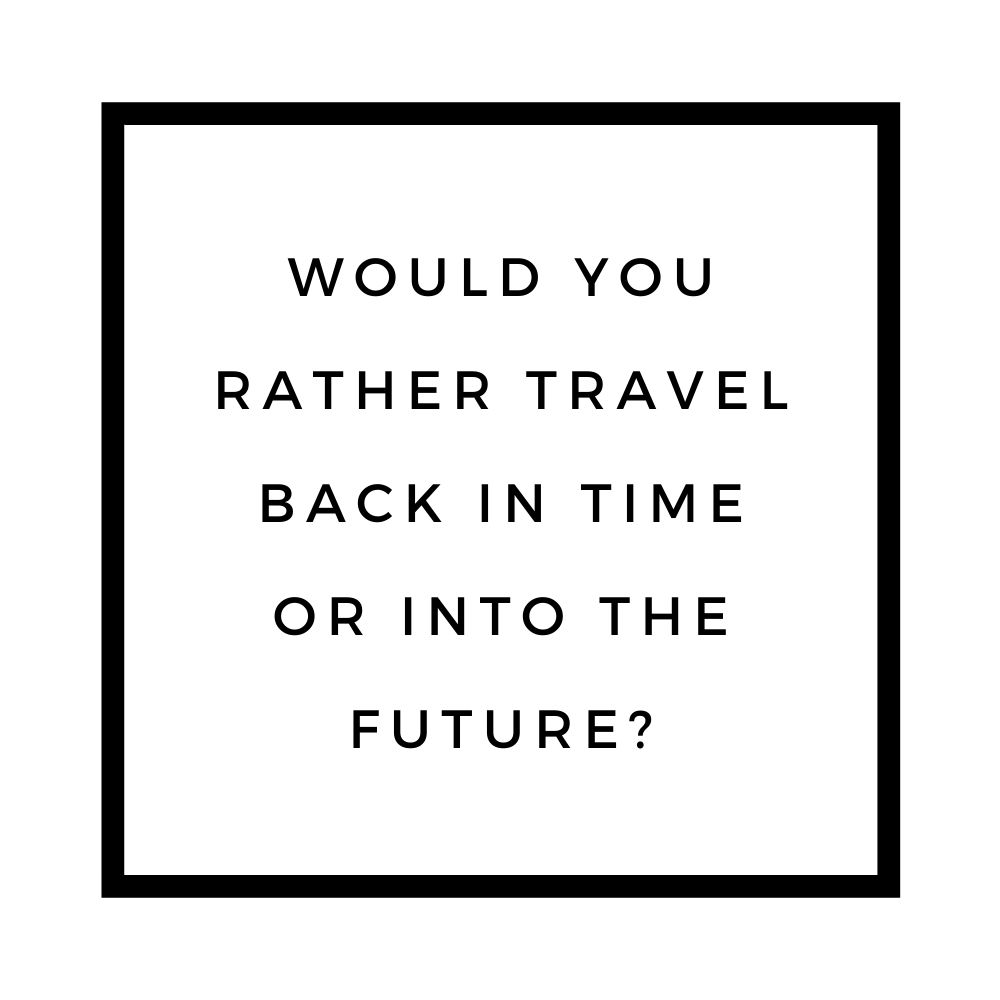 19. Would you rather give someone a foot massage or have someone give you one?

21. Would you rather have one sex partner for the rest of your life or have multiple sex partners but could never be in a relationship? 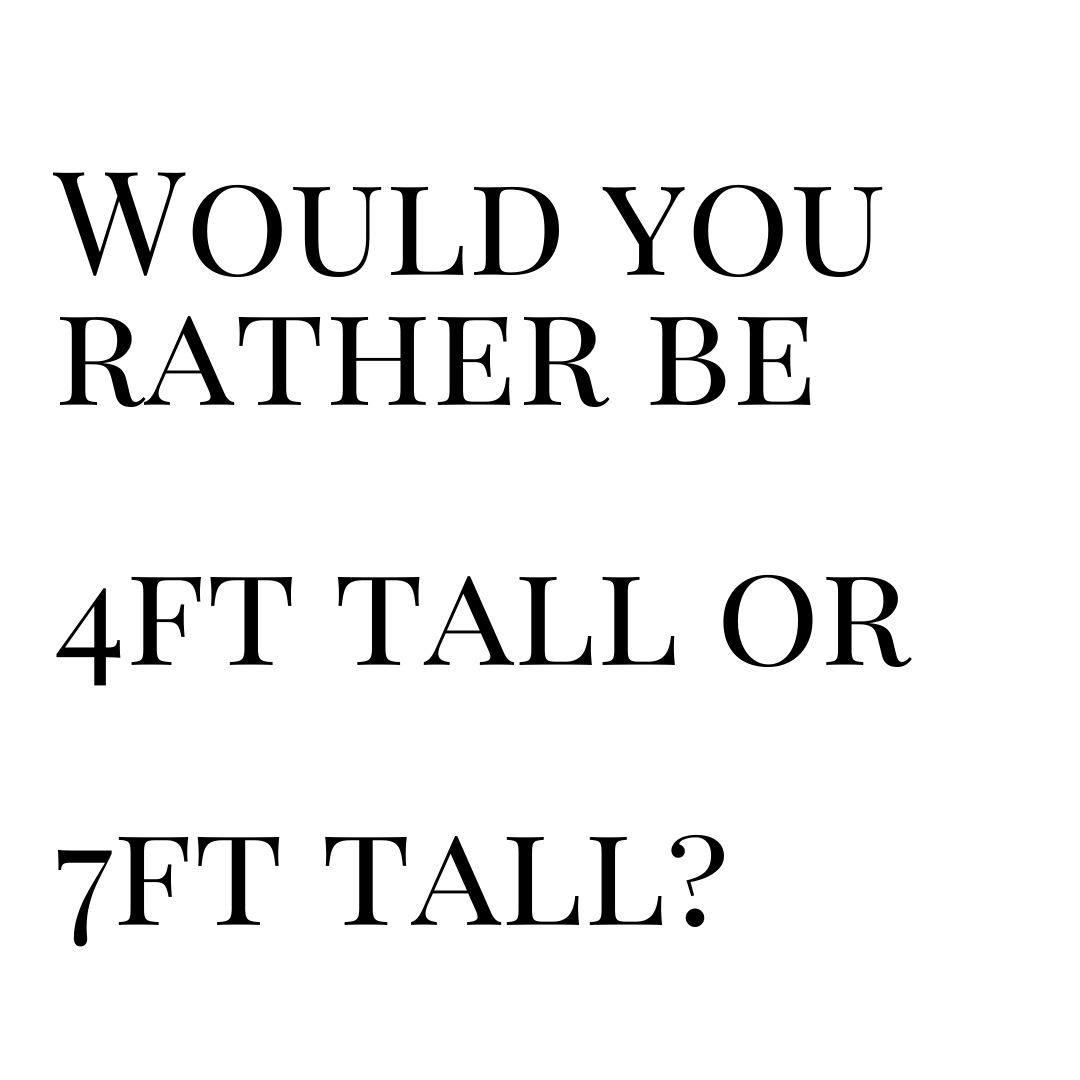 25. Would you rather be a peeping Tom or a flasher?

27. Would you rather be rich but with a tiny penis or poor with a big one? 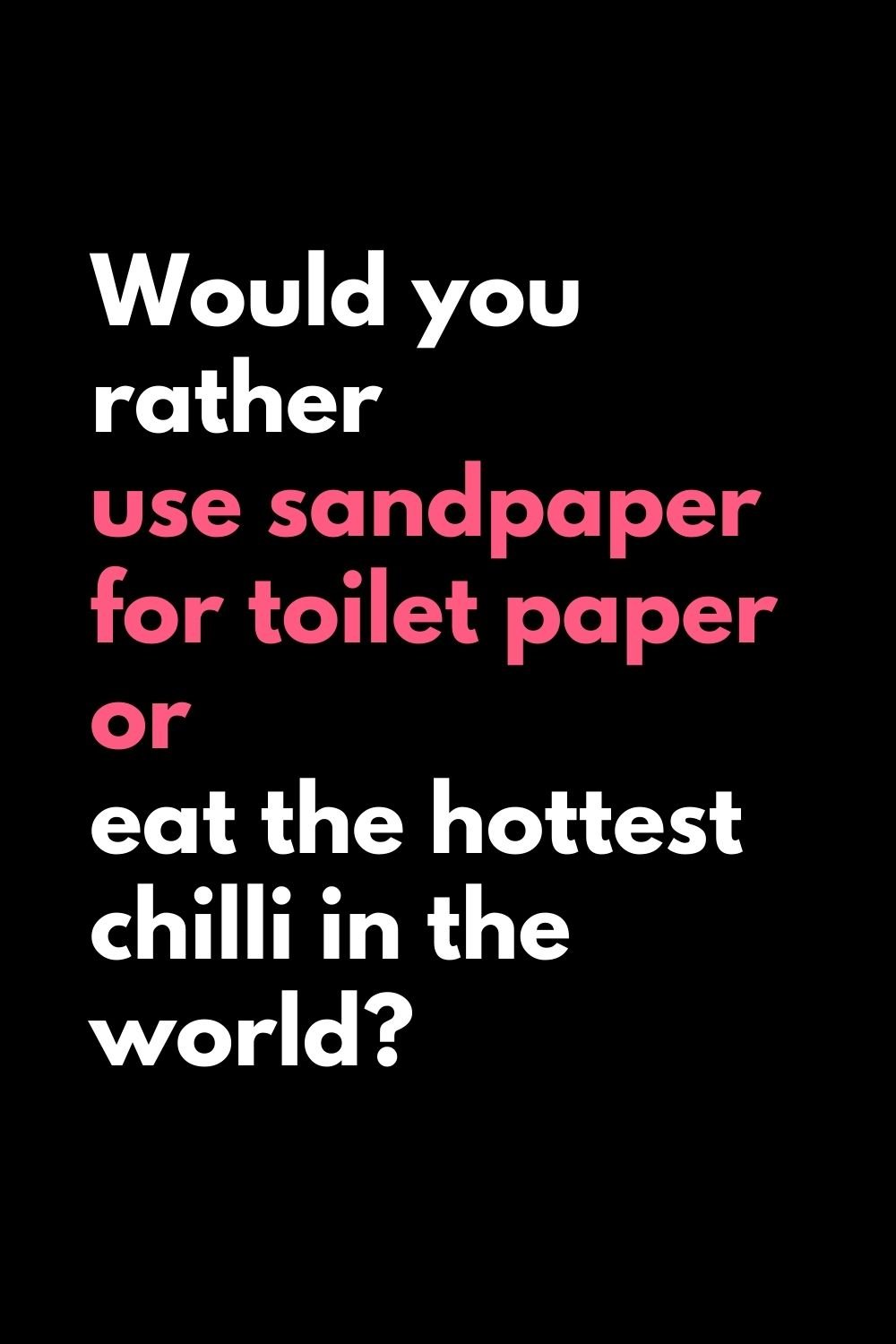 The great thing about Would You Rather is that it allows you to talk about topics that you normally just wouldn’t bring up. You might ask a question and then hear a totally different response than what you were expecting to hear.

Another benefit of the game is that it gets you and your guy talking. Sure, the conversation might be silly at first, especially when you ask a funny would you rather question, but that initial conversation is how you learn about your guy. You’re building a connection with him every time you have a conversation about what he likes and what he thinks and why.

These questions can allow you to talk about what you both like and dislike in a fun and unchallenging way. It can be difficult and intimidating to bring up what you like to do in the bedroom, but if you’re just answering a question in a game, it becomes much easier. Try this guide to sexual communication to make talking about sex easier, too.

Combining funny would you rather questions and sexy would you rather questions lets you keep the atmosphere relaxed and fun. Once you’re both laughing together about the funny scenarios you present in the game, you’ll feel close to each other and relaxed. You might even feel closer with your guy after playing this game, especially if you both just revealed something you were keeping secret.