At the beginning of a relationship, infatuation, chemistry, and excitement can keep the fire burning. However, over time, no one is immune to the changes that life brings: Kids enter the picture, parents fall ill, jobs are lost, and hormones change.

Change is a fact of life, though – so should it come as a surprise that our sexual desires can fall out of step with our partners at some point in our relationships?

Although advances in birth control and STI prevention in the past 50 years have made sex simpler and safer than ever before, there is still no perfect solution to the common issue of mismatched libidos.

To find out how frequently this issue comes between American and British couples, as well as their most recommended remedies, we surveyed nearly 1,000 people in relationships. Read on and discover how mismatched sex drives impacted these couples’ love lives. 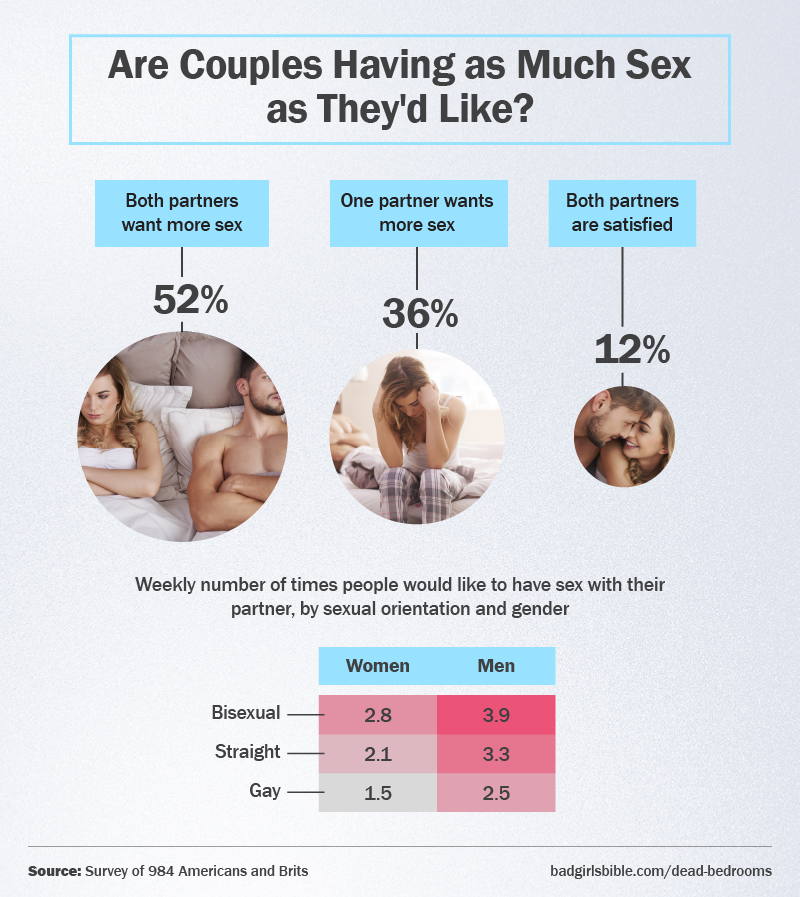 Just 12% of people we spoke to said they and their partner are both sexually satisfied. Three times as many couples experienced a libido mismatch, however, with only one partner being satisfied with their sex frequency (36%).

More than half of the people we spoke to said they and their partner wanted more sex. With the competing demands of kids, jobs, and social events, finding enough time for sex might be an issue. The good news, according to some experts, is that the solution could be as simple as coordinating schedules to facilitate sex.

Couples may do well not to believe that a happy relationship relies on frequent lovemaking. Although studies have found that having sex more than once a week doesn’t improve relational happiness, our respondents wanted more. When it came to their ideal sex frequency, men and women were quite similar across the board. Straight men wanted sex 3.3 times a week, on average, compared to 2.1 times for straight women.

The libido gap between partners grows as the relationship ages

During the first one to two years in a relationship, sometimes called the “honeymoon phase,” couples often can’t get enough of each other in the bedroom. But this doesn’t last forever – and the change can happen at different times for each person in the relationship. Our research found that sex drive differences between partners emerged years, even decades, into the relationship. 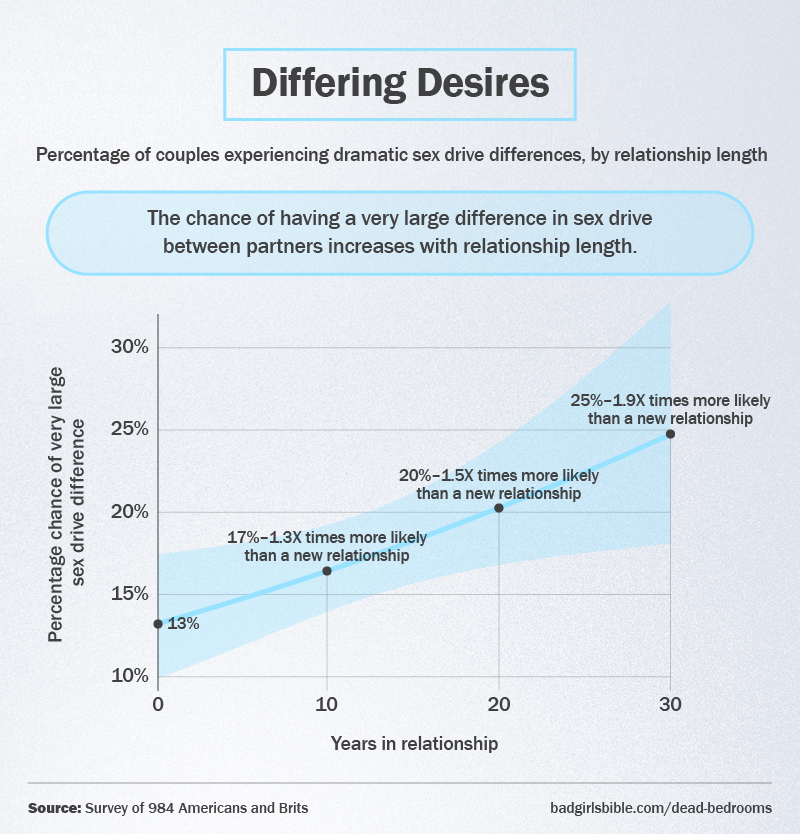 We asked people to rate the intensity of their sex drive on a scale of 1 (lowest sex drive) to 100 (highest sex drive), and then to do the same for their partner. The average difference in sex drive ratings between couples was about 25 points out of 100, showing that the average relationship contends with a significant disparity in sexual desire.

With mismatched libidos being so common, many are bound to deal with this situation at some point. When this happens, how do people with higher sex drives handle their unfulfilled sexual desires?

One in 20 cheated on their partner because they refused sex

We found that the most common solutions to mismatched libidos were also the simplest: Many took sexual matters into their own hands, literally. Half of the women we spoke to and nearly 3 in 4 men said they pleasured themselves when their partner didn’t want sex. 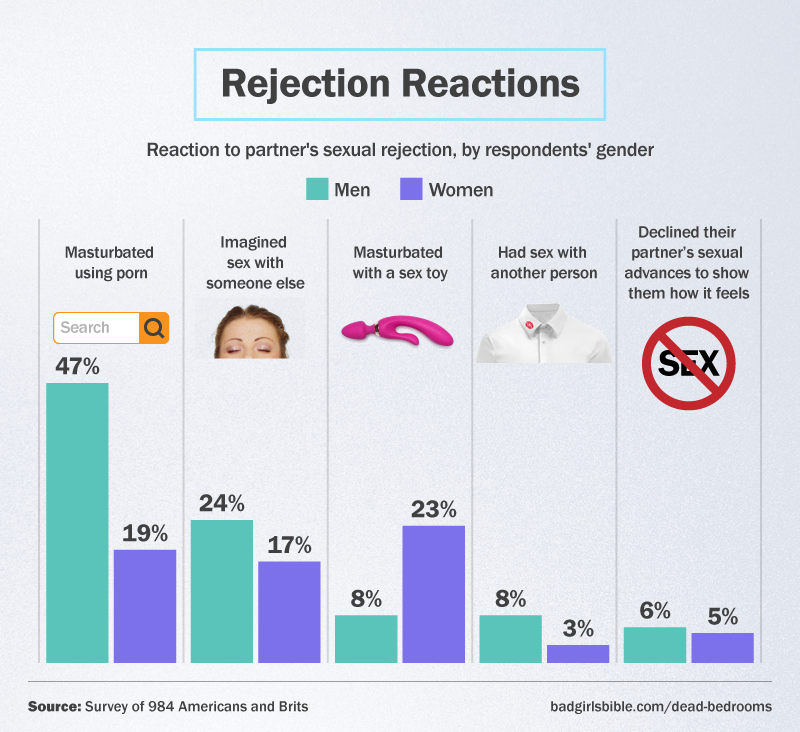 Some of our survey respondents dealt with unequal libidos by fantasizing about getting freaky: About 1 in 4 men and 1 in 5 women imagined having sex with someone other than their partner. A smaller number of people, just 8% of men and 3% of women, turned their cheating fantasies into a reality and actually had sex with another person.

Of course, such an extreme response would be unlikely to happen after just one sexual rejection. But how long would a dry spell need to be in a relationship before the average person would look elsewhere for gratification?

It’s very normal for sex to take a back seat in the relationship from time to time, especially after life-changing events, such as having a baby or dealing with health issues. But everyone we surveyed had a different threshold for what they considered normal and acceptable when it came to taking a sexual sabbatical. 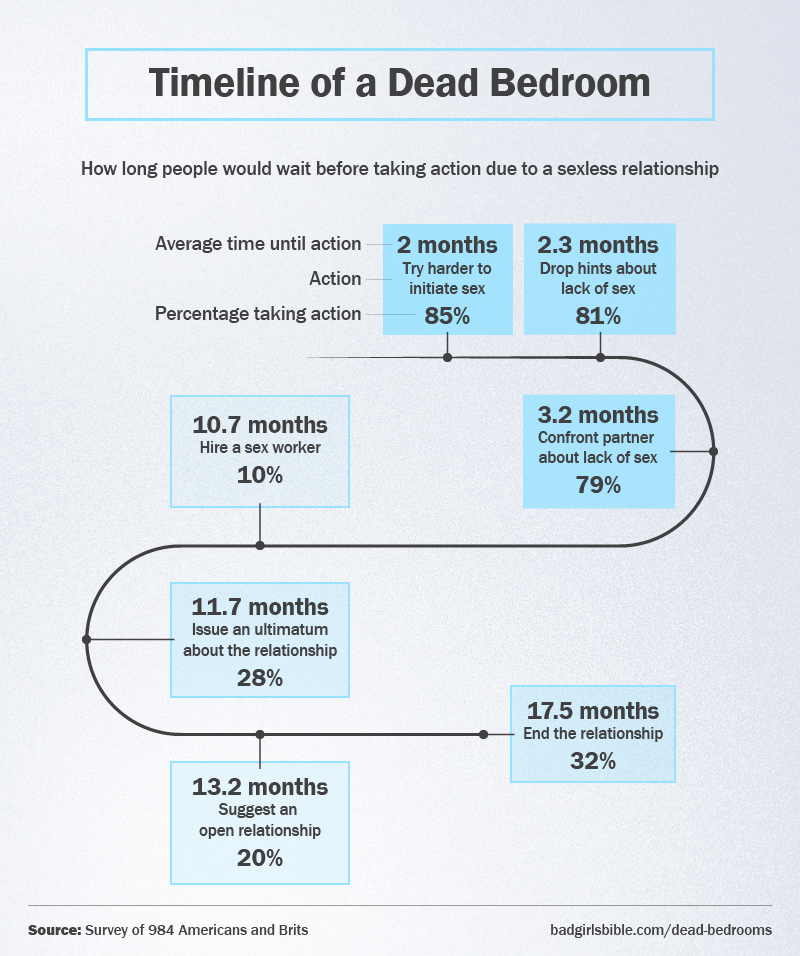 Eighty-five percent of people in relationships told us they’d wait two months without sex before trying harder to initiate intercourse. On average, people would try this somewhat subtle tactic about a month before talking directly with their partner about the lack of sex in the relationship.

While it seems promising that nearly 80% of participants would directly discuss the issue with their partner, the average respondent would wait three months before doing so. Open communication about sex can be difficult for even the most seasoned couples, but the risk could be well worth the reward. Having a discussion about sexual frequency could lead to other topics, like turn-ons and turnoffs, as well as previously unexpressed desires.

More than 1 in 4 people surveyed said they’d issue their partner an ultimatum if their relationship were sexless. On average, they’d wait nearly a year without sex before issuing a relationship ultimatum. Another 32% would see the ultimatum through and end the relationship after about 1.5 years without sex, on average.

Our survey respondents also considered nontraditional alternatives if they faced a sexless relationship: 1 in 5 people said they’d consider having an open relationship if their partner did not want to have sex anymore. Interestingly, this is the same proportion of Americans who’ve engaged in a nonmonogamous relationship.

In relationships with unequal sex drives, it can be easy for the partner with a lower libido to feel guilty about not wanting intercourse and for the partner with a higher sex drive to feel rejected when attempting to initiate sex. While this could create a very complicated dynamic within the relationship, should sexual gratification ever become an obligation between two people? 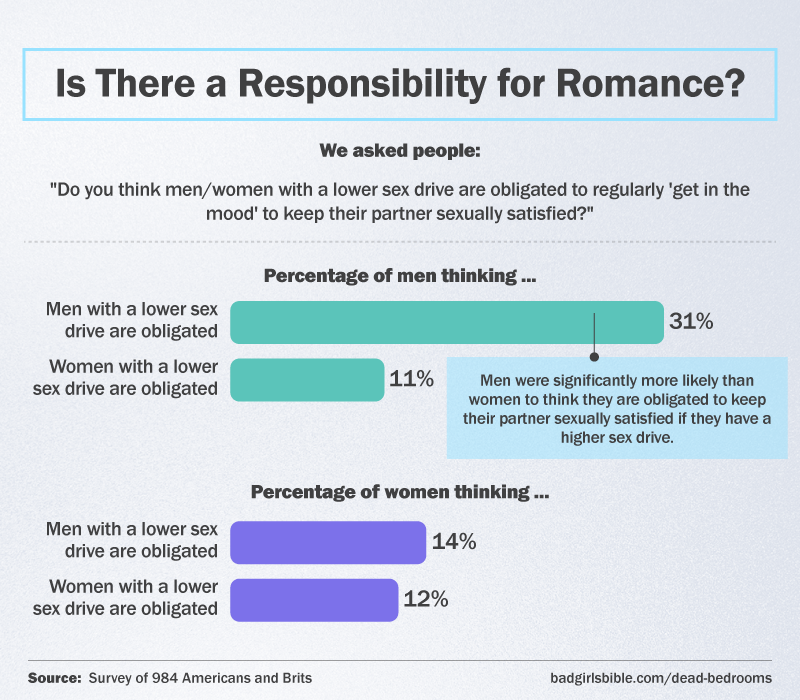 Of course, sex always requires mutual consent, participation, and enthusiasm from both partners. But roughly 10% of women said that in a heterosexual relationship, the partner with the lower sex drive should regularly get themselves in the mood for intercourse if their partner wants it.

The story is a little different according to men. When asked if a woman with low libido should get in the mood for their male partner, 11% of men said yes, about the same proportion of women who thought so too. But men were nearly three times more likely to place that romantic responsibility on themselves, as 31% of men thought if the man in a heterosexual relationship has the lower sex drive, then they should get in the mood to satisfy their female partner.

While sex is a powerful way to connect with your partner, it isn’t the only way. If sex starts to feel motivated by your own feelings of obligation, it may be time to take a step back. In fact, focusing on conversation, cuddling, and having fun together could help rebuild connection and desire with your partner without the pressure of physical intimacy.

With so many people feeling unsatisfied with the amount of sex in their relationship, and libido gaps becoming more likely as the relationship continues, couples would do well to consider what level of sexual satisfaction is important to them and communicate that to each other.

Always remember that mismatched libidos are normal, and our bodies are constantly changing. Open communication with your partner can smooth out potential conflicts that can arise in those situations. If all expectations are out in the open, and both partners agree on how to deal with dry spells when they occur, then the relationship is set up to withstand the hardiest of sexual droughts.

We surveyed 984 Americans and Brits in relationships in December of 2019, recruited using an independent academic research platform (491 Americans and 493 Brits). Participants were aged 23 to 73 with a median age of 43. We asked participants about the differences in sex drive they’ve experienced in past and present relationships, and the actions they’ve taken to deal with mismatched libidos. Men and women were equally represented in our survey sample. Twenty percent of our survey sample were gay or bisexual, with the remainder in heterosexual relationships. To avoid bias, participants did not know the survey was conducted for BadGirlsBible.com nor did they know the full details of the survey topic. The survey was described as being about “your current sex life and sex drive,” again to avoid self-selection bias. Our survey results are reported with a maximum sampling error of 3%.

This study was based on self-reported data. This means some data may have been influenced by participants’ exaggeration, minimization, or telescoping. The results are not weighted nor statistically tested.

Feel free to share our research on mismatched libidos in relationships for any noncommercial purposes. But please link to this page so that we are credited for the work, and readers can view the findings in full detail.