Flirting with a guy doesn’t have to be done in person. Texting and messaging him is an great way to build up some sexual tension. It works whether you’re sending flirty messages (20 examples here) to someone you’re just getting to know, or flirting through text with a guy you’re already seeing. 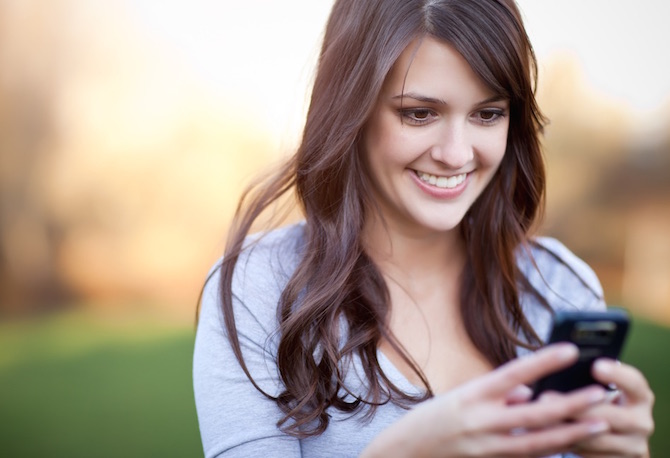 By knowing what to do – and what not to do – you’ll get your guy stirred up just thinking about you, and keep him that way until you see each other again. That’s the goal of flirting over text, after all…you want your guy to have you on his mind, and to be excited about seeing you again. He needs to be focused on you, and thinking about what you’re going to do when you’re together.

If you’re wondering how to flirt with a guy over text, it’s really not difficult. There are some simple dos and don’ts to follow that can help you steer the conversation and really keep the guy’s interest. Let’s start with the “Dos” when flirting by text…

1. Do keep it light at the start

You don’t want to go too overboard when you start flirting. There’s a difference between starting a flirty conversation and being too direct about what you want to do with someone when you’re alone.

Both can be great messages, but if you’re just getting to know him or you’re not sure how he’s going to respond, be sure to keep it light until you see how it goes. Once he responds a couple times, you’ll have a better idea of whether you’re coming on too strong or whether he’s into the flirting through text just as much as you are.

The same is true when you’re just flirting with him in person. You can learn more about that here.

2. Do use ambiguous messages from time to time, to keep him wondering what you meant

Flirty messages don’t have to be completely direct. You can be coy and play a little hard to get, even while you’re flirting. You don’t want to make things too easy for him, or you won’t get to enjoy the back-and-forth that flirting brings.

Every few messages, say something that’s a little bit ambiguous. That way, you’ll leave him wondering just a bit, and that will keep his interest. By keeping him guessing, he’ll be more interested in talking to you again. Because if he does lose interest in you, it’s all over. Flirty messages over text can help keep that from happening.

3. Do make sure to tease him over text

Lightly teasing him and him doing the same to you is important in any relationship. By teasing him, you can build even more tension between the two of you. You’ll find more on building sexual tension here. There’s nothing like a little teasing in your flirty text messages to get a guy riled up and thinking about a funny comeback he can send back to you.

4. Do use lots of pictures

Texting isn’t only about the words you send. Thanks to SnapChat, WhatsApp, iMessage and all those other apps, sending pictures is a breeze. And after all, isn’t a picture worth a thousand words???

While sending pictures of you looking hot can be a good way to turn him on (more on that here), it’s even more effective to send him flirty and fun pictures every once in a while. When he sees pictures of you smiling, winking, and looking cute while you go about your day, he’s only going to want you more. Combine those pictures with the right caption, funny quip or silly joke and your man is going to be hooked.

Another great reason to send pictures is the fact that men are very visual, and they want to see the person they’re flirting with. This helps keep them interested, which is exactly what you want to do.

5. Do use other mediums besides just text (silly pictures, emojis, etc)

This ties in with the previous point. When you’re flirting through text, make sure you don’t only text. After a while, it can become just words on a screen – which isn’t the best thing, as guys are very visual. Instead, spend some time adding some creativity into your messages, like emojis, or even a picture that references an in-joke you guys both have.

6. Do make him wait for a response *sometimes*

You want him to want you, and to know you’re interested, while at the same time, you don’t want to come on too strong or seem too eager.

If you always respond within seconds, he’ll think you’re just sitting by your phone, with nothing to do but wait for his text. That’s not a good thing, and can actually make a guy lose interest.

When you’re learning how to flirt with a guy over text, be sure to make him wait a little while for a response sometimes (not all the time). That shows you have a life outside of just talking to him, and can make you much more attractive in his eyes. It can also help him see you as a whole person, which is important if you’re in a relationship already or even just looking for one.

That’s the do’s of flirting with a guy through text, now let’s take a look at some of the don’ts…

1. Don’t force it if it’s not working

When you’re flirting through text, you shouldn’t have to force things. Flirtatious statements should come naturally, and the back-and-forth discussion should flow. If it’s not, there’s a reason. Stop and figure out the reason, instead of just pushing forward. It could be that the guy isn’t right for you, but it could also be that you’re just having an off day, or one of you said something the other person took in the wrong way.

No matter what the cause, there’s no point in continuing to try to force the flirt. Let it go for the time being, and talk about something else – or even end the conversation. Flirting should be fun, not something you have to force or feel obligated to do.

2. Don’t send too many flirty messages to him – otherwise you’ll never have a serious conversation

Learning how to flirt with a guy over text also means learning when to stop.

If you want to talk about something serious, and all you’ve ever done is flirt, how is your guy supposed to know you need to be serious for a minute? There should be times when you don’t flirt, and when you talk seriously with your guy over text.

Mix up how you do things, and your guy will understand that there are times and places for flirting and for having serious discussions. That can help you build good communication as a couple, and can also help him see you as more than just someone to flirt with. This is also true for sending dirty text messages (11 great examples here), make sure to mix it up.

3. Don’t feel the need to ever send nudes

Flirting through text doesn’t have to mean sending nudes. When you’re considering how to flirt with a guy over text, even if you’ve been together with him for a while, remember that nudes aren’t necessary. If he’s pressuring you to send them, don’t. If you’re considering sending them because he might like it, don’t.

They should only be sent if you’re really comfortable with it, and you really want to send them. If there’s pressure to do it, it’s almost never the right thing to do. Remember that, and you’ll make the right choices about nudes when you’re flirting with your guy. Fore more on this kind of thing, you might want to check out the guide on having Skype sex with your man.

To get you started on your flirting adventure, here are some example messages you can send to your guy. Pick and choose the ones that work best for you, and modify them however you see fit. That way, you’ll have a starting point for your flirty conversation, and your guy can help you take it from there. Remember, flirting should be fun for both of you. If it’s awkward or uncomfortable, it might be time to try something else.

It can be really fun to flirt through text, whether you’re getting to know a new guy or you’re in a long-term relationship with him. Flirting is fun for almost anyone, and there are great benefits to it that you can discover with your guy. Throughout the day, you’ll build up some great sexual tension, that can carry you both over into passionate encounters the next time you see each other.

How well you know the guy and how fast you want to move with him should be things you consider when you flirt, too. Not everyone moves at the same pace.

If you’re interested in getting to know a new person, you might want to keep the flirting a little bit lighter. You don’t know much about your guy yet, so jumping in too quickly might not be the right choice for you. If you’re already in a relationship with your guy, flirting might be more direct or explicit.

Either way is fine, as long as you and your guy are comfortable with the level of flirting that’s taking place. If it’s too awkward for you, or the guy isn’t responding the way you’d hoped, it might be time to change the kind of flirting you’re doing.

Read the cues you get from your guy when he responds to your texts. If he takes a long time answering you or seems non-committal about responding to your flirting, that’s something you’ll want to consider. Maybe he’s not much for flirting over text, or he could be not as into you as you’d hoped. Finding out is important, because you want to save your flirting for a guy who’s really into it (and really into you).

Understanding your guy and where he’s coming from is the best way to make sure your flirting over text will have the desired results.